Recently, a colleague sought an explanation regarding the untimely death of a friend. It was one of those questions that exposes the vulnerability of a confident apologist. How one wishes that the dots could be connected, the blanks filled, and a satisfying response proffered. But lo and behold, that is not to be. In some questions, an agnostic stance appears more honest and reasonable. It’s no wonder Job’s friends made more sense in their silence than in their speeches. In that ancient story of a life whose struggles are articulated exhaustively, Job’s pain is something we still grapple with millennia later.

In her book When Life Takes What Matters, author Susan Lenzkes suggests that this posture of grappling with uncertainty, even angered grappling, can be kindly held by the Christian God: “It’s all right—question, pain, and stabbing anger can be poured out to the Infinite One and God will not be damaged….For we beat on his chest from within the circle of his arms.”(1)

For Job, something similar is true. Somehow his own questioning appears to lose its sting when he sees how wide this circle really is. In the glimpse God offers him from the very foundations of the world, Job’s despair is somehow quieted within a story so much bigger than his pain can comprehend. 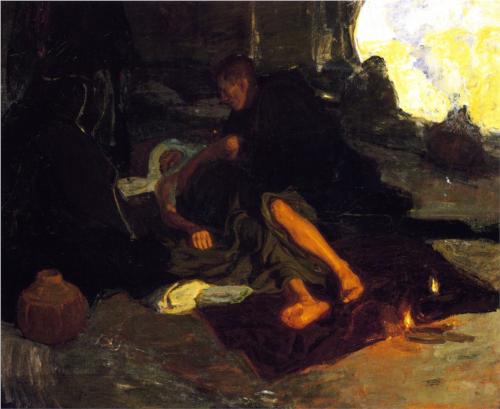 In the story of Job, questions of theodicy, as valid as they are, are shown to be premature. While God does open a new chapter in Job’s life, the recompense to Job during his later years is not to be mistaken with the final package. God’s complete solution would be unpacked on the other side of time. In an atheistic framework, by contrast, where there is no possibility of life after death, the question of suffering and injustice is hard and strong, for any hope dies at death.

Thankfully and mercifully, for Job’s sake and ours, the gospel further counters this framework in flesh and blood. The New Testament boldly tells the story of Jesus Christ as one of passion, crucifixion, and resurrection. For those who want to dismiss the Old Testament as imaging a violent God, there is death and gore in the heart of the gospel as well. But here, the question coming forth from a hurting soul like Job’s is, in fact, the cry of Jesus himself on the cross: “My God, My God, why have you forsaken me?”

Author Edward Shillito draws out this startling contrast of a God whose magnificence both birthed the foundations of the world and all the created order and yet stoops down so low as to die as a criminal in order to re-create it:

“The other gods were strong; but Thou wast weak;
They rode, but Thou didst stumble to a throne;
But to our wounds only God’s wounds can speak,
And not a god has wounds, but Thou alone.”(2)

In the grand and hopeful story of the Christian God, death is an integral part of it. A common word used to refer to the death of believers in the New Testament is “sleep.” Yet, when the Bible talks about the death of Jesus, it never uses that word. Jesus died so that we might “sleep” and wake up to a world where all is made well again. Death was our destiny until the resurrection of Jesus made it a door.

While pain and suffering are matters of serious concern that demand solidarity and sympathy, the redemptive work of God in the life, death, and resurrection of Christ brings hope out of surrender to this saving grace.

Neil Vimalkumar Boniface is a member of the speaking and writing team at Ravi Zacharias International Ministries in Chennai, India.

(Originally published in A Slice of Infinity)