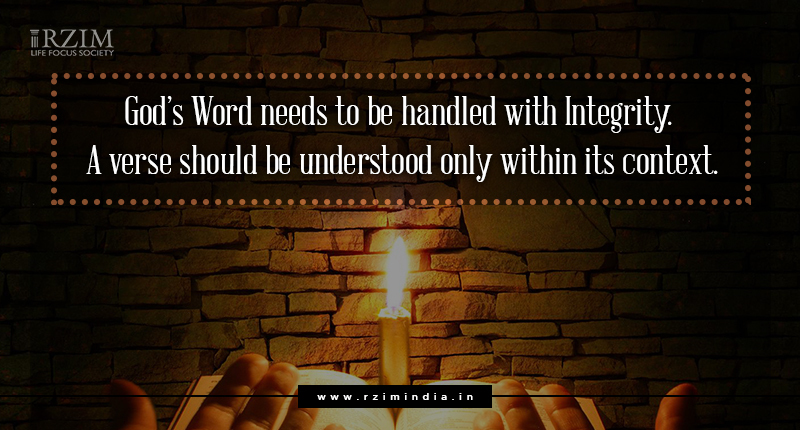 (How NOT to read the Word )

As someone who has had no formal theological training but had thrived on large spiritual helpings from pulpits, tapes, DVDs and the World Wide Web, and of course my  ‘insights’ from the study of the Word, I have come to feel the intense need to UNLEARN and RE-LEARN the Scriptures (the way it’s meant to be). The Apostle Paul admonishes his protégé’ to

Do your best to present yourself to God as one approved, a worker who does not need to be

ashamed and who correctly handles the word of truth.

Through this article, it is my intent to introduce and inform you about a creepy kind of verbal abuse, shall we call it ‘Wordal’ Abuse (for want of a better ‘word’?) that most victims are totally oblivious to. But it’s not something that’s new on the scene. It could well be as old as time itself! Astonishingly, the perpetrator had the audacity this time, to show up and try his trick, of all people on The Incarnate Word Himself! Matthew 4:5-6 records;

Then the devil took him to the holy city and placed him on the pinnacle of the temple, saying to him,

“If you are the Son of God, throw yourself down; for it is written,

‘He will command his angels concerning you,’ and ‘on their hands they will bear you up,

so that you will not dash your foot against a stone.’”

Bang on! Misuse! Or worse still, ‘Mess-use’! The adversary sure is the trailblazer of ‘Wordal’ Abuse. They come in different forms. Beware! As you spiritually douse yourself with what comes off the internet or even the pulpit, you might be unknowingly injecting yourself with shots of ‘erroneous interpretations’ that can suck the life out of you and once infected, you sure are a carrier and would more often than not, infect many others too. There are many vaccines that can help us stay from being infected with erroneous interpretations. One of the easily available ones and the most effective is; “Never read a Verse”! While growing up, our class too had a joker and as most jokers that age, he hated… You guessed it right… Studies (Wasn’t a hard one, was it?) He would go, “the more you study, the more you know, the more you know, the more you forget, so, why study?!” He sure was a Smartie!

Almost all of us know John 3:16 by memory. What about John 3:15 or 3:17! You see what I mean? When we read a single verse, without reading sections above or below to know where and how it’s set, i.e., the context, we are asking for trouble.

John 12:32 is a case where a phrase can have two widely divergent meanings. It’s not uncommon for worship leaders to quote this statement of Jesus: “And I, if I be lifted up from the earth, will draw all men to Myself.”. We “lift up” the Lord when we exalt Him and declare His glory. If we focus on Jesus and ascribe glory to Him, the power of Christ is released to transform the hearts of those listening and they are drawn to Him. This is the meaning the worship leader has in mind, but it isn’t what Jesus is talking about in John 12:32.

When we test our interpretation above in the light of the very next verse, the result looks oddly different! The verse in its context reads thus.

“‘And I, if I be exalted before the people, will draw all men to Myself.”’

The very next verse reads,

No ambiguity now. In this instance, being “lifted up” clearly means to be crucified. Oops! Praising Jesus won’t kill Him, will it? I don’t think so!

This makes perfect sense. Jesus had to be crucified before salvation could be offered, an appropriate lead-in to the verse that comes next, the most loved verse in the world: John 3:16.

Years ago when the billionaire Howard Hughes died, it is told that his company’s public relations director asked the casinos in Las Vegas, where Hughes owned multiple casinos, to show him respect by giving him a minute of silence. For an uncomfortable sixty seconds, the casinos fell eerily silent. Then a pit boss looked at his watch, leaned forward, and whispered, “Okay, roll the dice. He’s had his minute.”3 (From the book,)

I wonder if sometimes we treat God as those gamblers in Las Vegas treated Howard Hughes. We interrupt our busy schedules once a week, rush into church, give God “His hour,” or scurry and scamper through a verse or two from the Bible and then forget about Him and get back to what we’d rather be doing.4

If we truly want to know him for all his worth, then, we’ll do well to ‘Never read a verse’!

Try working on this one.