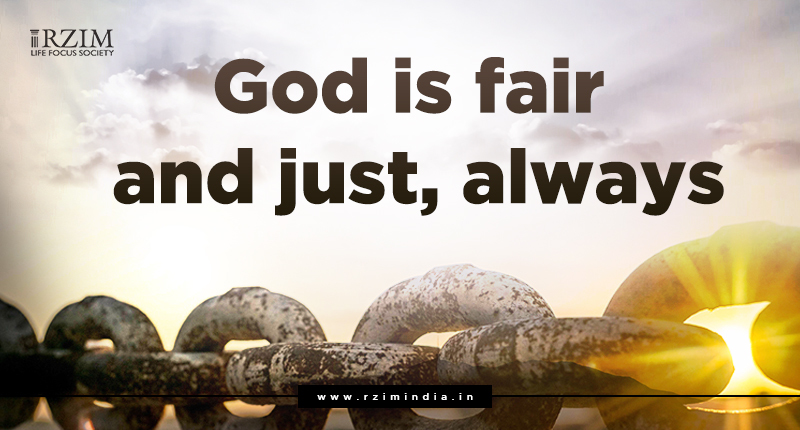 Life is not always fair and when unfairness strikes, a question begins to haunt us: “Is God fair?” This pierces us to the core and leaves us at a complete loss. We feel that it is unjust when God seems to let the innocent suffer, while the evil ones go scot-free. It looks unjust when God lets a little baby die of a devastating illness. It seems unjust when some people on earth have plenty to eat, while others struggle for survival. Many abuse and rape victims, whom I have counselled, live in abject misery and cry out asking where the so-called good God was when their abusers got away.

The Bible has many examples of such cries for justice. The children of Israel cried out during their bondage in Egypt. The righteous Job continued to seek God, after losing his family, property and health. But kept asking his friends the same questions. The Psalmist often cries out, “How long will you defend the wicked?” (Psalm.82:2) Habakkuk questioned God’s fairness and cried out, “How long shall I cry for help and you will not hear” even as God allowed the wicked Chaldeans to punish the Israelites. Even in the life of Jesus, it looked unfair when the murderer Barabbas was freed, while Jesus, the sinless Son of God, was mocked, flogged and executed as a criminal. In one of his parables (Luke 18:1-8), Jesus talks about a widow who would not stop pestering the unjust judge until she received justice from him.  Jesus concludes the parable by stating, “Will not God bring about justice for His elect who cry out to Him day and night? Will He continue to defer their help? I tell you, He will promptly carry out justice on their behalf”.

God is a just God. The problem arises when we look at things from our perspective and try to judge God because we do not see things from His perspective.  If you tell me that this is easier said than done, believe me, I am writing this from experience. Life hit me with unfairness many years ago, and I struggled for almost two decades, wearing a smiling mask and hiding the pain inside. I was walking on egg shells every day, trying to avoid another flare up. I was manipulated and dominated, as my heart chased after a soulless, passionless relationship. While trying to sustain it, by denying the pain and chaos, I was focused on immediate survival.  I was naïve and had constructed my life around my family, embracing it as my complete identity. But when betrayals and rejections came, I believed that I was dispensable and replaceable and ended up with a shattered self-esteem. I felt betrayed by God Himself, as He seemed deaf to my pleas when my dignity and dreams were snatched away from me. I raised my fist towards the sky and cried out: “Does God really exist? If He exists, does He care?”  My insecurity grew to such an alarming extent, that I tried taking my life more than once.

But the all-knowing God had another plan. He intervened in my life at the right time, while I was dying of pneumonia, barely kept alive by a ventilator. A supernatural presence entered that ICU and embossed on me an everlasting transformation. The divine voice spoke thrice: “I am giving you a new life”. I saw the Cross and the Holy Blood flowing in torrents, and I could see every sin in me being washed away. This supernatural Presence engulfed me and I experienced an incredible lightness of spirit. Even after recovery, the Voice did not stop but continued: “Read the Word” again and again. So, I opened the Bible, which had been kept closed for many years. God healed me in every way through His Voice that spoke the written Word. He gifted me with the peace and joy that surpassed all understanding. He became my vindicator. He became the lifter of my head and gave me honour whenever I was put down.  He caused my enemies to look to me with respect. He became my comforter, and healed my post-traumatic stress disorder and depression. He became my deliverer. He became my all in all.

I can say with confidence that God guides us by His great and final plan, with a vision of heaven that brings justice and hope, as we walk through the dusty roads here on earth.  This is brought out beautifully in Psalm 73, where the psalmist Asaph says, “I have been stricken all day long and chastened every morning”, but he ends triumphantly by saying, “Besides You, I desire nothing on earth. My flesh and my heart may fail, but God is the strength of my heart and my portion forever.” He is not saying that life will be blessed in every way if you follow the Lord. On the other hand, he affirms the fact that it is important to gain God’s eternal perspective. When Asaph says, “Besides You, I desire nothing on earth”, he has reached the highest level of relationship with God. When God becomes our treasure and best portion, we are most blessed, and our trials fade into the background in the bright light of eternal perspective. When we shift our focus from self to God and think from His perspective, we begin to see that God is not unfair.

That is why God says in Isaiah 55:8, “For My thoughts are not your thoughts, nor are your ways My ways”. Jesus gives this perspective in the parable of the labourers in the vineyard, where the master gives the same wages to both those who came early and the ones who came late. God, as Master, says, “Am I not allowed to do what I choose to do?”– Matthew 20:1-16. God being fair is not about total uniformity, but it is trusting that the sovereign God, who is also righteous and holy, will act justly. In Joel 2:25, God says that He can supernaturally and abundantly compensate the years that the ‘locusts have eaten’. God is forever in the business of restoration, by picking up broken pieces and rebuilding us. He is a just God.