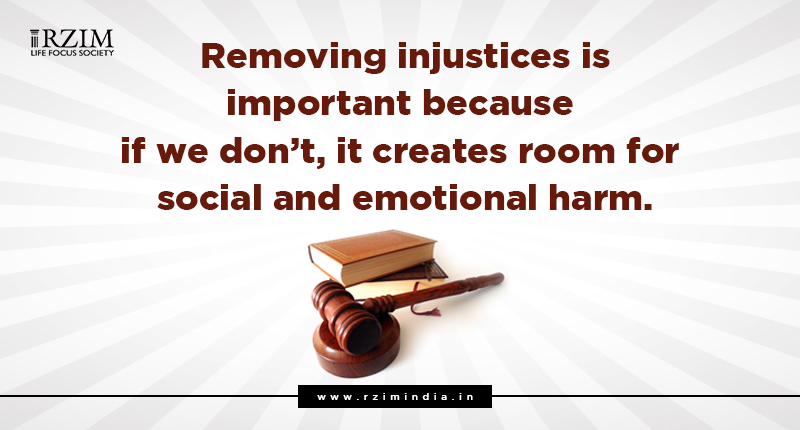 How Justice can be used to Build rather than Break people

As teachers, my wife and I were constantly in situations that required fast track judgements. There have been instances when even after a long and arduous process of interviews and intimidating sessions our conclusions were not as accurate as we expected. Punishments were doled out and it was too late to backtrack. We can all relate to situations like this at home with our families or at work with our colleagues. Arriving at a perfect state of justice seems impossible. However, attempting to remove evident injustices is a conceivable notion.[1]

Removing injustices  is important because if we don’t, it creates room for social and emotional harms. For instance, half a dozen students were suspended for saying something offensive to another student. Since I was privy to some of their conversations, I found it hard to say who was really in the wrong. The outcome of their punishment did not improve the situation it only made things worse for everyone involved.  Perhaps we ought to change the questions we ask. Instead of purely focusing on punitive outcomes, we should rather seek restorative outcomes.[2] Instead of focusing on just institutions it might help to shift our focus on the Individual.

Removing injustices could begin by asking a set of questions that might help change the attitudes of those affected. Asking questions like – What happened? Who did it? What do you deserve? – involves less time but it does not appreciate the intricacies of human needs. When we ask questions like – What happened? What was required of you? What can we do to make things better? – It creates room for dialogue, expressing feelings and a sense of obligation. When we hear how people are affected it changes our notion of justice, both for the perpetrator and the victim.

When Priyanka Gandhi, the daughter of our late Prime Minister Rajiv Gandhi, met Nalini, a co-conspirator in her father’s assassination, everyone was keen to hear from her. After a prolonged silence she accepted an interview. When asked, have you forgiven Nalini, she replied, “I was still thinking I was somebody who could forgive her after what she had done. I then met her and realised, what am I talking about? Here is a woman who has suffered, as much, if not, more than me.” The questions raised by Restorative justice does not excuse crime, it however, allows us to see things we might not have considered earlier. Similarly Nalini’s response was, “It was so unbearable that I started to cry. At that moment and place, I felt like dying, so much was the pain.”[3] Without minimizing the nature of the crime or wrong done, the idea is to focus on the lives involved in the crime.

Part of the reason why people fear God’s judgement, rightly so, is because our answers to certain questions might result in lethal consequences. In the Psalms, the characters there are looking forward to God’s judgements based on their righteousness. The Christian understanding turned the whole damned thing on its head. God is judged for our sins. We are judged based on his righteousness. God is not interested in just punishing us but his interest lies in restoring our relationship with him. The ultimate question God is asking is not, what did you do now? It is what should I do to ensure that this never happens again? The answer to those questions cost him his life. If it cost him his life we are obliged to live the righteous life he has imputed us to live.

Now how do we apply this in our lives, especially if Christian means – Christ like? Do we accept punishments on behalf of others? Will such drastic steps result in justice? Our answers may vary. Alternately I would like to suggest we look at Jesus’ style of resolving conflicts. You will notice how he incorporates dialogue, expression of feelings and a sense of obligation with everyone involved. This should be our focus too.

Our purpose should be to foster expression of feelings and needs. In John 4:7-19 Jesus created an environment for the woman to express her feelings, albeit vivaciously, nevertheless it still allowed her to speak her mind out. Even when her sin is exposed Jesus in a non-threatening way makes it look as though he agrees with her when actually he had prompted it. His focus here is not to find fault and make her feel guilty on the contrary he understands her needs. At the end of that conversation she understands that she has been speaking to the Messiah. He fulfils her insatiable longing for relationships with inexhaustible eternal life. This exchange not only restores her relationship with God but also with others. Rather than blaming and finding fault, perceiving her alleged arrogance, Jesus simply listens to her needs and offers her himself.[4]

Working our way through people’s feelings and needs even when they are wrong helps us find clues as to what might really help.

Our purpose should be to engage in dialogue with everyone involved and ensuring it never occurs again. In John 8, the scribes and Pharisees bring a woman caught in adultery to Jesus and ask for his opinion, since the law says they must stone her. Jesus, much to our disappointment, does not conduct an elaborate and incriminating investigation. He simply involves everyone in the conversation; ‘The one who has never sinned may cast the first stone.’ He then bent down and perhaps doodled. When he looked up he could only see the dust created from the commotion of falling rocks and the woman intact. Jesus did not allow authoritarian figures to decide what the penalty should be instead he involved them and turned their anger into compassion – to suffer with her. He turned it into everyone’s problem and expected it to never occur again. The episode ended with him giving her a divine fiat, ‘Go and sin no more.’

Engaging in a dialogue with the accused, faultfinders and the law might lead to unexpected results.

Our purpose is to focus on relationships and to achieve a desired outcome. In Luke 18:15, Jesus offers us his style of resolving relationship problems. If someone does something wrong we are to rebuke him in private.[5] This interaction must initially be a private affair. It is not an impersonal distant reaction. He expects us to make it personal and reduce the distance. It is easy to make impersonal decisions when it comes to doling out judgements about others. While this encourages communication it also helps to understand motivations and experiences of the person concerned. This results in empathy. If this doesn’t work he asks us to involve the community. In the long run, the sins we commit affect the community negatively.  While we involve the community all affected parties must be included. Often this does not happen; third parties get involved and exclude the people who were actually affected. Eventually Jesus says that if the offender is unwilling to take responsibility for his actions, exclusion in the solution.

If everyone involved is focused on the individual it might be possible for the community to achieve their desired outcome.

If we attempt to answer these questions we could remove injustices and allow Justice to triumph in the lives of individuals.

[1] See, Amartya Sen, The Idea of Justice (London: Penguin Books, 2009). Sen’s focus is on removing the causes of injustices that eventually lead to unjust practices and arrangements. However here I would like us to imagine removing injustice to mean; to encourage environments conducive to express, feel, involve and focus on relationships and the implications of our behavior. Punitive measures do not seem interested in these outcomes and that I would regard that as an injustice to both the victim and the perpetrator.

[2] A cursory Google search will introduce you to a host of links on Restorative practices that can be applied to your setting.

[4] For the first time in her life she would have experienced an offer from a man that did not involve anything physical but something spiritual and way more satisfying.

[5] Rebuke comes from the French word “Rebuker” which means to cut down or force down. I have taken that to mean trying hard to stop someone from pursuing an action they should not.