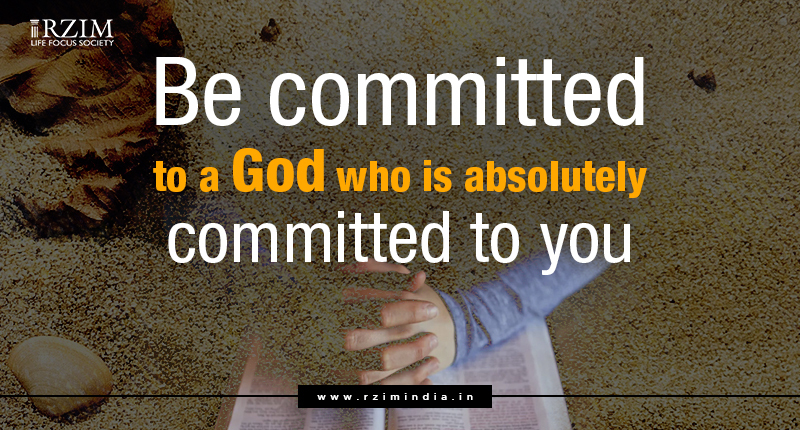 As human beings often we fail to keep the commitments we make. We all desire to keep to our commitments but we find ourselves falling short. This is especially true in our commitment to our Lord and saviour. We love Him and want to serve Him with everything we have, yet many things in this world prevent us from doing so. The answer is not to get disheartened and turn away completely, but rather pick ourselves again and recommit ourselves to our loving God who receives us with open arms every time we come back to Him. The following is a four-way devotional which can help us in our journey of making Jesus Christ as our ultimate commitment. As we approach Christmas day, we sincerely hope that you can set aside some time to read the devotional and the connecting Bible verses.

How do we understand the nature of commitment in a capitalist society? If we do not like our jobs, we can quit and move to another one. If we do not like a particular grocery store, we can shift to a more convenient one. It seems that convenience is the biggest priority, but commitment is way down the list. It is not difficult to see how this idea has infiltrated our relationships. Statistics show a large number of fathers who have left their homes because it has become highly inconvenient for them to look after their families. The number of marriages which break down because either one of the spouse or both find out that marriage isn’t as convenient as they thought it would be. This is a dangerous place for us to be in. One that can have devastating effects on individuals and society as a whole.

But in the Bible we see a very different picture. Throughout scripture we see that the only way God relates to His people is through covenant relationships. A covenant can be defined as a deep and meaningful commitment. Covenant promises can arguably be stated as the most important theme throughout the Biblical narrative. Adamic covenant, Noahic covenant, Abrahamic covenant, Davidic covenant (the verses of the covenant promises are the Bible readings of this devotional) are a few of the prominent covenant relationships we see.

The value the Bible places on commitment is very important. It does not view it as something to be taken lightly but to be revered and taken with caution. This deep-rooted commitment to God we see in the Bible must be the basis of our meaningful commitment to one another. We cannot be in a relationship with another as long as we get a certain pleasure or happiness from them and then quit as soon as the pleasure dies. We are called to be faithful to our commitments to God and to each other. The Bible also shows us that from deep and meaningful commitments, something beautiful and lasting is born. Something that can only be understood when it has stood the test of time.

As you start this devotional, pray that God help you strengthen your understanding of commitment to Him and to those around you.

In Psalm 137 we see the heartfelt yearnings of the Jewish people in exile. By the rivers of Babylon the Israelites make one of the most important decisions in history, to stay committed to Yahweh no matter what. To give a little background to the situation (which we can find in Jeremiah 52) Nebuchadnezzar, the king of Babylon, had destroyed the temple of Jerusalem and taken the Israelites captive. For a Jew, God resides in the temple, so if a foreign power had destroyed Yahweh’s abode and taken His people away, then that leads to a very difficult existential situation which challenged their theology. The Jews were now forced to interpret these events in light of what they knew about God.

Whenever a tribe was captured by a foreign power, the whole tribe would usually give up their god for the new god because the new god had proven himself/herself to be more powerful. It was a common practice to abandon their known god and embrace the new god in light of the captivity. But the Israelites do something radically different. By the rivers of Babylon they decide not to abandon their God but repent for their sins. In fact it says in verses 5 and 6 of Psalm 137, “If I forget you, O Jerusalem, let my right hand forget its skill! Let my tongue stick to the roof of my mouth, If I do not remember you, if I do not set Jerusalem above my highest joy!” Such strong language is used to ensure that the people do not forget Yahweh, the God who brought them out of Egypt. They understand that their existential situation is not because Yahweh is not powerful, but the consequence of their own actions. They come to the conclusion that it was Yahweh who allowed the foreign power to attack because of their own disobedience. And instead of abandoning Him, they decide to hold stronger to Him and repent.

This is a strong lesson for us. Many times we might interpret our difficult situations as God not caring for us or our situations being too big for God to handle (even though we might not state it in those words). But we should not derive our understanding from our existing circumstance but rather from the revelation of God through Jesus Christ. We commit ourselves to the God who loves us no matter what our situation may be. He is the true and lasting one. It is only to Him and Him alone that we give our allegiance to. God is still the one on high, he deserves nothing less than our absolute commitment.

This passage (Gen 15:7-17) makes very little sense if we purely look at it from our 21st century lens. Why did God ask Abraham to cut animals into half and keep them on either side? Why did God appear in the form of a smoking fire pot and walk through it? This act makes sense only within the cultural tradition of the near east during Abraham’s time.

In those days when two parties (usually rulers) made an agreement with each other, they did this exact ritual. They cut a certain number of animals in half and put them on either side and walked through them. What it signified was that if either one of the parties broke their promise to one another, then the fate of these animals could fall on them. The person who did not keep to their end of the agreement could be ripped into half like the animals in the ritual.

But in the story we see that once the promise between Abraham and God was made, it was only God (in the form of a smoking fire pot and a flaming torch, verse 17) that goes through the pieces. Which means that if either of the parties did not fulfil their end of the covenant then only God would be the one who would end up with the fate of the animals. That the punishment for not keeping the promise by either of the parties would fall solely on God.

On the cross of Calvary we see exactly this happening. Though throughout the Old Testament we see God being faithful to His covenant promises, the Israelites time and again fail Him and do not keep their end of the promise. They go behind false gods and despise Yahweh. And in the New Testament we see the climax of this covenant (as stated by NT Wright in his book, ‘The Climax of the Covenant’). Jesus’ death on the cross was the absolute way in which God showed his faithfulness to His people. He suffered on our behalf because we have not been faithful to the true God of this world.

The Greek word for faith/believe in the Bible is the word Pistis. The word is also translated as believe in many of the translations. One of the dominant ways this word is understood in our times is ‘coming to a conclusion about certain facts’. So to have faith or to believe in Jesus is to understand facts about His life and death. Not that it is a wrong way of defining it, but to merely define it in terms of cognitive proposition is to reduce such a loaded word to our simplistic post-Enlightenment understanding.

In the early church before a person was baptized, they were asked the question, do you have Pistis in Jesus Christ? The person would then respond by saying Yes, Pistis in the father, Pistis in the son, Pistis in the Holy Spirit. They however did not just mean this in terms of coming to certain factual propositions about the trinity, but that from here onwards I give my complete allegiance to this God.

The concept can be compared to a person joining the army and taking an oath of allegiance. This does not reduce the cognitive dimension in any way, a person has to ascribe and believe certain propositions to come to a position of faith. But we see that faith is much more.

Faith is giving our ultimate commitment and loyalty to the one we are devoted to. As Christians we are devoted to Jesus Christ. We give our ultimate loyalty and allegiance to Him. Faith is about committing to Him on a daily basis. To make our choices and decisions in line with our commitment to Him. No matter what comes our way or how Satan seduces us with the things of this world, we are called to be committed to the one we have put our faith in.