Posted in Conviction
Home Page
>
Conviction
>
Where are the Men?
Posted on July 2, 2018August 12, 2020
by Charles Premkumar Joseph 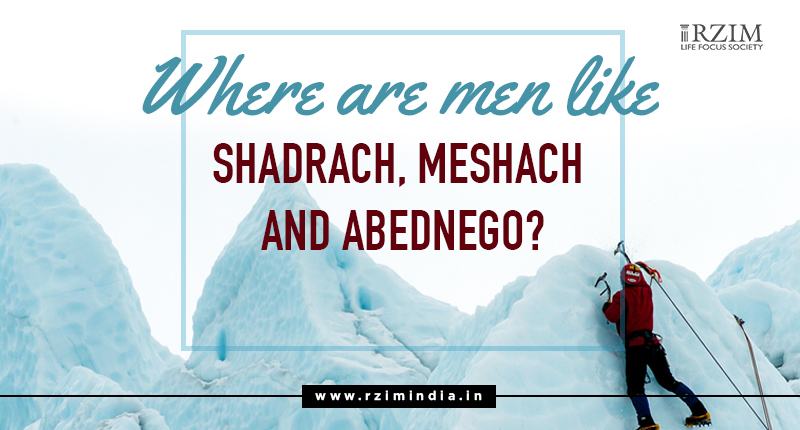 They slayed it! And that, in style!

16 Shadrach, Meshach and Abednego replied to him, “King Nebuchadnezzar, we do not need to defend ourselves before you in this matter. 17 If we are thrown into the blazing furnace, the God we serve is able to deliver us from it, and he will deliver us from Your Majesty’s hand. 18 But even if he does not, we want you to know, Your Majesty, that we will not serve your gods or worship the image of gold you have set up.”

Now, that is some gutsy stuff, captives before their captor King. The late President of Iraq, Saddam Hussein, had this belief that he was a reincarnation of the ancient King of Babylon, Nebuchadnezzar. In his desire to make this belief public, he ordered that the archaeologists and construction workers restoring the ancient city of Babylon replace every other image of Nebuchadnezzar embedded in the walls with a similar style image of himself. Think Saddam, think Nebuchadnezzar. Nebuchadnezzar was perhaps the greatest and most powerful king in Babylonian history. He was essentially the representation of everything that embodies human depravity.[1]

This above is a piece of scripture that leaves me with goose-bumps even today. Tenacity, Audacity, Grit, Guts and Nerve Personified – that’s what they were. Men (perhaps, mere boys) of courage, character and conviction. Where did they go? Is a natural question that follows as we look around. AK Bright attempts to answer it in his poem;

“Where did they go?”

I think somewhere down the line in our parents’ efforts to give us everything they never had, they forgot to give us what they Did have~

We sit back and wonder
where our glory days went
I saw them galloping towards purgatory
saddled with truth, upon common sense.

Poignant and convincing (save purgatory!). We have become a generation of easy-goers. Ambivalent, ultra-flexible and supra-fluid, where valour, mettle and grit are unrealistic and impractical ‘virtues of antiquity’ that losers fantasize about!

As a health professional by training, one of the unfortunate proclivities that I constantly battle is an addiction to sniffing signs and spotting symptoms and working diagnoses in my head, even when no one’s asking! As I observe the body of Christ today (of which I’m a part), I sniff signs, I spot symptoms and I diagnose. A new malignancy! A carcinoma, I christen it, ‘Aconvictionoma’ (‘a’ denoting the ‘absence of something’). ‘Aconvictionoma’ is an aggressive ever growing lack of “conviction” found in the body of Christ. A modern day malady, nay, a tragedy.

The word “conviction” comes from the Latin root “convincere” meaning, “to convince”. “Conviction”, (as used in this piece) therefore implies “the act or process of convincing,” “the state of being convinced,” or “a fixed or strong belief.” As David Regan observes, “convictions, unlike prejudices, are founded upon a thorough, objective investigation of facts.”[2] Convictions are strong beliefs or truths that one is fully convinced of, having been persuaded by evidence or argument and not merely subjective feelings. We have a conviction when we are thoroughly convinced or fully persuaded that something is true. Convictions are more than personal preferences or subjective opinions; they involve strong beliefs that manifest themselves in actions. A conviction is a strong belief that we have obediently made a part of our life and practice. Having convictions is being so thoroughly convinced that something is absolutely true that you take a stand for it regardless of the consequences.[3] I like the way the Urban Dictionary defines it, “a belief that one would die for”. Though very simplistic, it does convey a powerful angle of this loaded word.

The antonym of conviction, could well be compromise. The motivation for compromise is perhaps convenience. We live in a time-space, where everything goes. Today, we are a society that parades and champions tolerance. G. K. Chesterton, the English author who strongly influenced the life and writing of C.S. Lewis, once said, “Tolerance is a virtue of a man without convictions.” This statement alludes to one of the dire consequence of the ‘new’ tolerance: the loss of conviction.[5] The Oxford Dictionary defines Tolerance thus: The ability or willingness to tolerate (endure) the existence of opinions or behaviour that one dislikes or disagrees with. The “new” tolerance is different—it tells us that, what every individual believes is equally right or valid. In other words, all values, beliefs, lifestyles and truth claims are equally valid. True tolerance does not involve the watering down of our convictions to the lowest common denominator.[6] Peter Kreeft defines old tolerance as: (a) Being egalitarian regarding persons and (b) being elitist regarding ideas. The new tolerance, turns it on its head and defines it as: (a) Being egalitarian regarding ideas and (b) being elitist regarding persons.[7]

Rob, the Monk’s take on conviction is piercing. He writes;

Half a heart consumes a whole;
One’s reticence comes at great expense,
the ship is sunk that avoids the shore
by steering toward a shoal.

How true. We as the body of Christ, the organism of Truth are largely half-hearted, reticent, steering away from sure shores, and wrecking ourselves into shallow suicidal shoals. The clarion call for men of conviction is distinct and loud, in a culture that has made truth appear, stranger than fiction. George Krokos brilliantly points that, “the truth is sometimes said to be stranger than fiction, which is why it requires at times a lot more conviction.”

Convictions birth conduct, conduct births character, character refines culture and culture influences conduct, which snowballs into character and culture again, with the potential of setting off a revolution, perhaps. A buzz for the benefits of belief, a lack of fizz for prayer and the word, a distancing from a needy brother, a disinterest in things divine, a disgusting attitude are symptom that we’ve ignored for too long. We are on the verge of demise, merrily oblivious of its imminence. The magic pill, is an ancient one, a resolve to tarry in prayer, a hunger for his word, a passion for his world, a resolute commitment to the truth, an audacity to die for our faith, a fire to keep our convictions blazing.

Godly convictions, can even ‘convict’ kings! They command praises from the lips of persecutors. They challenge conventions. They startle captors. They capsize the schemes of the enemy. They sing the favour of God. They flaunt the sovereignty of the King. They cut kings to their size. They change hearts. They turn tables. They promote the purpose of God and the proclaimers of the truth. They are ingredients that flavour winsome Christian witness in a world of compromises, conveniences and comforts.

It is natural then to look for men of conviction around. Shadrach’s, Meshach’s and Abednego’s – Where shall we find? Perhaps, closer home, there lays hidden in each of us, a man of conviction, in some slumber. Gurudev Tagore’s prayer penned a century ago has strains that surprisingly resonate with a yearning for a land and a people full of courage, truth, reason, thought, action – conviction;

“Where the mind is without fear
and the head is held high,
where knowledge is free.
Where the world has not been broken up into fragments by narrow domestic walls.
Where words come out from the depth of truth,
where tireless striving stretches its arms toward perfection.
Where the clear stream of reason has not lost it’s way
into the dreary desert sand of dead habit.
Where the mind is led forward by thee
into ever widening thought and action.
In to that heaven of freedom, my father,
let my country awake!”

And so shall it be! As we sign up, as Gandhiji would say, to be “the change that we want to see” – Modern day Shadrach’s, Meshach’s and Abednego’s – Men of Conviction, perhaps with God’s favour and will, mere men can still impact kings and rulers of this age.