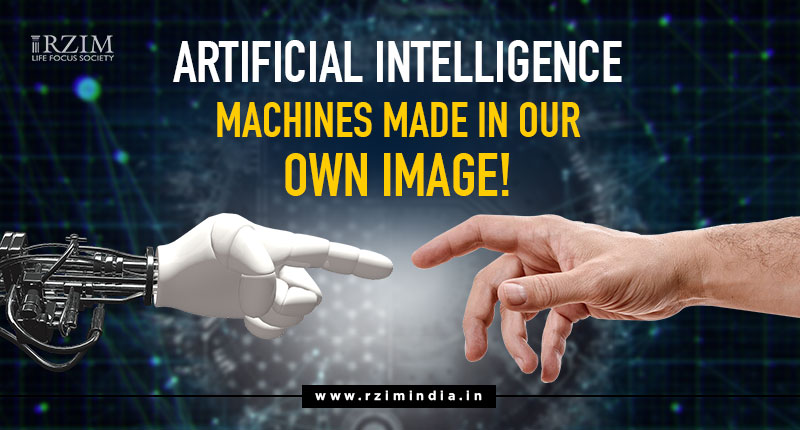 A professor of religion recently gave a very strange classroom assignment to his students. He told his students to ask Siri, the personal assistant in Apple devices, to pray for them and observe what happened. Siri basically responded, “I’m not programmed to do that.” Welcome to the world of artificial intelligence and the questions that it raises.

We are now in the midst of the fourth industrial revolution popularly known as Industry 4.0. One of the key drivers of this revolution is Artificial Intelligence(AI). Hyper-intelligent machines are already an in-thing in the industry. While the invention is recent, the idea has a long history. For decades, artificial intelligence has been advancing at a breakneck pace. Today, with the aid of AI, computers can fly airplanes, interpret X-rays, and examine forensic evidence. There are algorithms developed for painting masterpieces of art and composing symphonies. The next step looks like is the development of ‘artificial moral reasoning’ where machines could make moral choices. In AI, every feature of learning and intelligence is conducted by a machine.

Human beings are made in the’ image of God’ is the foundational pillar on which the edifice of the Christian faith rests. As believers in the Lord Jesus Christ, what are we to make of the rapid progress in the field of AI?  “The development of full artificial intelligence could spell the end of the human race,” Stephen Hawking told the BBC in 2014. The explosion of artificial intelligence has the potential for disaster if the innovation happens irresponsibly. In the industry the primary concern seems to be economics. The moral , ethical and spiritual dimensions of AI revolution need to be carefully studied and responses made.

Technology today allows creation of your  ‘digital twin’ – a  physical copy of yourself! Now the question arises does that digital copy also have a soul? More importantly will it possess the ‘image of God’ which is uniquely bestowed on humans at creation? In other words, is the digital twin a moral being? What happens if that twin starts praying? Will God hear that prayer? AI therefore seems to be a ‘disruptive technology’ and one of the areas it disrupts is theology! Many regard AI may be the greatest threat to Christian theology since Charles Darwin’s ‘On the Origin of Species’. How can the Christian worldview navigate the messy world of AI?  A three-step process perhaps would be helpful.

The first step is to ask the ontological questions. What separates a human from a machine? Machines are made, not begotten! We get mesmerized by what things do and do not pause to ask the question what they are. Human soul, human personhood and human worth are inextricably interlinked with the image of God that is unique to us as human beings. The Biblical worldview recognizes the physicality of creation and that God values physical reality. This is demonstrated by the fact that the Word chose to become flesh. We also look forward to a future with resurrected bodies and life and not a disembodied existence- a future that has both continuity and discontinuity with the present existence.  So to elevate machines over humans is a reductionist notion that borders on idolatry – worshipping creation rather than the creator.

The second step is epistemology – as creatures how do we go about knowing this created world truly. Our world view can inform in our spheres of influence to shape public opinion on AI. We could join conversations which has already begun and bring insights from the Scriptures for the need for discipline in application of science for the common good. While we wrestle with the emerging developments, we must remember what Scripture teaches about what it means to be human, the sanctity of work, and the kind of world God has created. Technology should not be  used to manipulate, distort and destroy, but to preserve and fulfil our innate humanness. In the defence establishment where I work, AI is one of the key initiatives now being taken up for implementation  wherever possible. Already we are experiencing that if God-given natural intelligence is not pressed into service, confusion and chaos reign!

Thirdly there are ethical questions that AI raises. How do we handle job loss due to automation and care for those whose jobs are threatened by automation? Autonomous vehicles on road, air and under-water will become commonplace in the near future. If one of those vehicles meets with an accident, who will be held responsible? Are we to support initiatives for using robots for the care of elderly and children? How about supporting human machines that can mimic human intelligence? On the other hand, there are positives. AI can be employed for medical research, search and rescue operations, humanitarian relief, environmental monitoring etc. AI could be serving as an assistive technology to help people with disabilities. So the Christian response to the ethical questions should be driven by the answers to ontological and epistemological questions.

Like in any science-faith interface issues, Christians should avoid extremes of uncritical swallowing and wholesale rejection of emerging technologies. While we avoid extremes, we can play a vital role in  bringing  discipline to technology to move forward  in the right direction with  discernment that comes from obedience to God’s Word. Some have suggested that the advance of technology and AI will eventually solve all our problems. There is now immense trust in technology and attempts to posture it as saviour or rescuer of the human condition. Many perched on the cutting edge of AI research behave as if AI is a digital deity who is a saviour – who can save us from war, poverty and crimes- and can be worshipped. Left on its own AI, instead of being a saviour, can turn out to be a destroyer. It is important to recognize that AI can become a tool for power politics where a small group of people manipulate and control a large population. CS Lewis in Abolition of Man  warns that “Man’s power over Nature” can become “a power exercised by some men over other men with Nature as its instrument.” (C.S. Lewis, The Abolition of Man, HarperOne, 1974, p. 55).

Many  technologists believe that artificial intelligence is on an inevitable path toward autonomy. The trajectory of AI raises some fundamental questions for the Christian faith. The questions that frequently arise in AI cover the range of philosophical questions: what is really real? (ontology), how  do I know it? (epistemology), what is right and good? (ethics), and what does it mean to be human? (philosophical anthropology). AI is yet to address questions of sin, suffering and death. As Christian believers we can make key contributions in shaping opinion on the role and future of technology in our society. While harnessing the benefits of AI for redemptive efforts like automation of menial tasks, we cannot afford it to allow driving a ‘human-less economy’ and a ‘jobless future’ . The Bible never anticipates non-human intelligence, much less addresses the questions and concern it creates. It does, however, teach that God has created human beings in God’s image and is seeking to establish a special relationship with each one of us. Therefore all questions (and answers!) of artificial intelligence raises need to be peppered with natural intelligence that God has given us!

Biju George holds a Masters degree in Naval Architecture and Ocean Engineering  from the IIT Kharagpur. He has put in 27 years of service with the Mazagon Dock Limited, a Defense Public sector undertaking India’s premier warship and submarine building yard. At present, he holds the position of Deputy General Manager with the Design Department of the Mazagon Dock Limited.