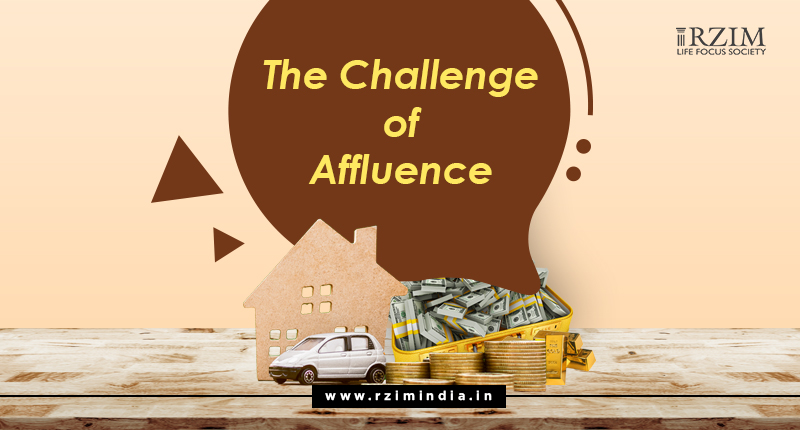 In one of his lesser known works – ‘How much land does a man need?’ – Leo Tolstoy writes of a Russian peasant farmer named Pahom. Pahom hears of some landowners – the Bashkirs – whom he plans to manipulate into selling him their land. The Bashkirs offer Pahom a deal. When the sun rises, he is invited to begin traversing a perimeter of their land on foot. Whatever land he covers, he may keep for 1,000 roubles.  The only condition is that he must return to his starting point by sunset. If he fails to do so, he gets nothing and the Bashkirs keep his money. Excited about the acres of land he can acquire, Pahom sets off at sunrise.

The pursuit of affluence is more ubiquitous today than ever before.  We desire it. We long for it. We pursue it. What are the implications of the ‘way of affluence,’ the ‘truth of affluence’ and a ‘life of affluence’ and how do these three well-trodden paths of humankind play out in the context of our lifelong search for fulfilment, identity and wellbeing?

Since the industrial revolution, global economic growth has gone from around 0.1% per year to around 4% per year –  a forty-fold increase. It follows that with more wealth generated, there has been wider pursuit of it. As Oscar Wilde wrote “the god of this century is wealth…to succeed, you must have wealth.” However, we see many people who have great material wealth who are unfulfilled. The only explanation can be that the ‘way of affluence’ fails us as a means to fulfilment.

What about the ‘truth of affluence’? What is the nature of material wealth and how does it relate to our identity? In Eastern cultures – often referred to as ‘honour-shame’ cultures – the pursuit of honour as a foundation for our identity has been cloaked with consumerism. We continue to pursue honour, but we do so by accumulating wealth. The problem of using affluence as a foundation for our identity is that material wealth is necessarily temporal. The poet Walt Whitman referred to material wealth as “conquered fame.” He was right. All material affluence will be conquered – either by time, by circumstances, by political, social or cultural upheavals, by family tragedies, unemployment, illness, accidents or death. No matter how strong a house is, it is vulnerable if it is built on weak foundations. The ‘truth of affluence’ reveals that it fails us as a stable foundation on which to build our identity. As Jesus Christ said: “Do not store up for yourselves treasures on earth, where moth and rust consume and where thieves break in and steal.”

What then of a ‘life of affluence’ – one lived seeking short term material desires. The Harvard psychologist Daniel Gilbert calls it the ‘hedonic-treadmill.’ We desire, we attain, we desire, we attain – yet the cycle never seems to end and we are never wholly satisfied. On some level our material desires always disappoint us. They promise so much and yet they fail to deliver. Whichever way we look at it, affluence fails as a marker of wellbeing.

The ‘way of affluence,’ the ‘truth of affluence’ and the ‘life of affluence’ fail us. So what are we left with?  Our desires for fulfilment, identity and wellbeing remain. Is there a better way, a deeper truth, a more abundant life? The answer is yes; and it is offered to us through the person of Jesus Christ. The world tells us to follow certain ways, believe certain truths and live certain lives. In radical contrast, Jesus says “I am the Way, the Truth and the Life.” God – through Jesus Christ – offers us complete forgiveness of our imperfection, complete redemption from our guilt and shame, complete security in our identity through adoption into his family, complete assurance through the promise of eternal life with Him and complete wellbeing through the flourishing and joy that inextricably come with a life walked with Jesus.

In the final scene of Tolstoy’s story, Pahom – sprinting to the finish line – manages to reach his starting point just as the sun sets. He has secured enormous wealth. But then – exhausted from his epic run – he promptly drops dead. In the final scene, Pahom’s body is buried in a grave measuring just a few square feet, thereby answering the question ‘How much land does a man need?’ Jesus fittingly and famously asked, “What does it benefit a man if he gains the whole world and forfeits his soul?” It is only through the life-changing forgiveness, peace, security, love and fulfilment that comes with accepting Jesus Christ into our lives, that our hearts find peace. We only overcome the challenge of affluence by understanding that when it comes to the deepest needs of our hearts, affluence is not up to the challenge.