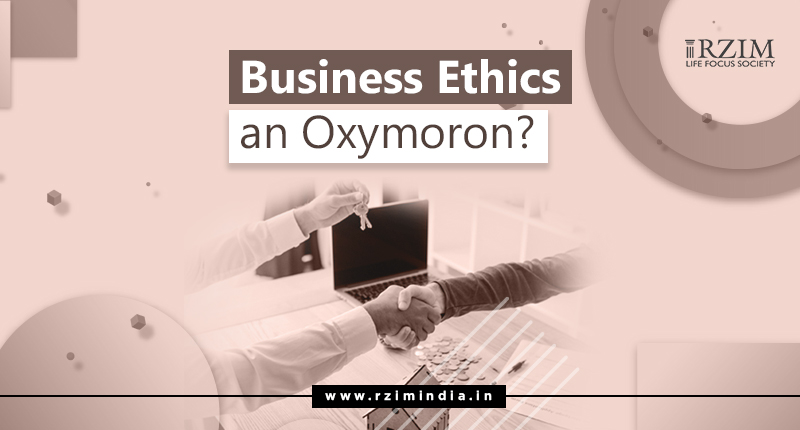 Writing 740 years before Christ, the prophet Isaiah called out the people of his time saying ‘your coins are all counterfeits, your wine watered down’, referring to their cheating and misrepresentation in the marketplace.

Amos, Isaiah’s senior contemporary and a layman turned prophet, says the same thing to Israel; first by pointing out the lack of ethics among the surrounding nations and then zeroing in on the same sins in Israel.

Hazael of Syria who was cited for his cruelty would no doubt have responded that this was war and ‘exceptional circumstances justify exceptional measures’. But God does not. Closer to home Hesummarizes the sins of Israel as sins against others, against revelation and against grace. (Amos 2:6-8)

John Motyer comments “three principles were held and acted upon: the primary importance of seeking material possessions (the sin of covetousness), the irrelevance of the rights of other people (the sin of indifference and oppression) and the unrestricted promotion of self – advantage (the sin of self-importance)”.

Evidently, ethics in business, or the lack of it, is nothing new.

Having been in the marketplace for over thirty years, I could almost say that ethics in business is an oxymoron, sadly even in Christian circles. Perhaps the challenge is the intangibility of ethics. We all know what sin is, but ethical or unethical practice is much more ambiguous, even nebulous. Some would even say it lies in the eye of the beholder. But does it?

Perhaps a definition of what ethics and business ethics in particular is – might help? As a layman may I suggest that ethics is the space that exists between the letter of the law and the spirit of the law. None of us wants to sin or be guilty of a crime but we all flirt from time to time with how far we can go without crossing the line. That’s where ethics resides. We are under no illusion that murder is a crime, but ruining a colleague’s reputation that’s where the question of ethics comes in. That’s where the higher standard of not harbouring hate comes in.

Personally, I have found John Ortberg’s analogy of the frequent flyer very helpful. I know how many flights and how many miles I need to maintain my frequent flyer status. But if I were to apply the same principle to my marriage, I would be in serious trouble! Just how much love do I need to show to remain married, how many dishes should I do? If I were to ask those questions, I probably wouldn’t still be married. Those are questions we simply don’t ask because we operate on a higher paradigm; that of love.

Yet isn’t that how we approach so many of our business relationships? Which is why this is also the answer to the question of business ethics. Rather than trying to see how far I can push the envelope without sinning or committing a crime, Paul would say he has a better way. That of love. The Corinthians lived in a dog-eat-dog world much like ours. Trust was expendable, hype was celebrated, people litigious! Yet Paul proffers a different benchmark, ‘what would love do?’ Leviticus 19:11-13 says ‘don’t steal, don’t lie, don’t deceive anyone,..don’t exploit your friend or rob him, do not hold back the wages of a hired hand overnight’.

But what about misrepresenting the pay or opportunity during the interview? How many increments and salary reviews are promised when there is no intention of following through? Is that not holding back the wages? How many times do we skip over the disadvantages of the product we are promoting, or leave it to the ‘fine print’? Isn’t that a form of deception? I believe Paul’s approach is in one way much easier? What would love do? If I genuinely have your best interest at heart would I recommend you take the job offer? Would I honestly recommend the product as the best option for you?

Hard questions and yet ones that those of us who bear the name of Christ are called to ask. James 4:17 reminds us ‘if you know the right thing to do and don’t do it, that for you is evil.’ A non-Christian friend of mine from a well-known business community commenting on a mutual Christian acquaintance said, “If he was one of our community I would have known what to expect from the beginning and planned accordingly, but as he said he was a Christian I expected him to behave differently, operate to a higher standard”.

Unfortunately, he was very disappointed. Many outside Christendom clearly say that ethical business practice as defined by Scripture is unfeasible and they make no bones about doing whatever it takes to get ahead or close the deal. However, for us as His disciples, that is not an option. Situational ethics cuts no ice with God; not for Hazael, not for us.

Business ethics may remain an oxymoron, but may the ethic of love win the day.

Nathan Andrews #keasdad, Hospitality, Educationist and Real Estate Consultant who believes his primary calling is to help fellow Christians be salt and light in the marketplace.