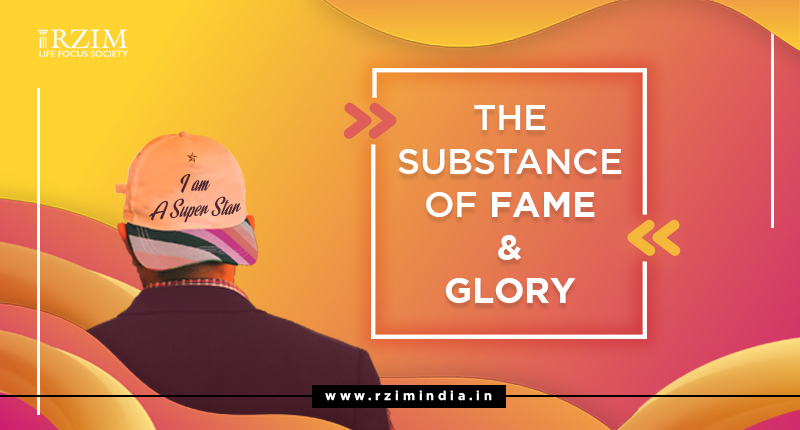 Years ago, a young man at a Bible college tentatively asked: ‘Doesn’t it seem odd that God would desire the praises of His people? Is God attention-starved?’ ‘That seems like a fair objection,’ I countered gently: ‘but what if God indeed was deserving of the praise?’ The God of the Bible demands worship not because it would make Him feel better, but rather that humans would do well to worship that which is praise-worthy and not fall into idolatry (i.e., worship of something or someone other than God as if it were God).

The Dictionary meaning of the word ‘glory’ means fame, renown, great praise or honour. The drive for individual fame and power is unprecedented in our times. The social media has thrown up opportunities to present oneself as someone worthy of a ‘like’, if not more. The glamorous and the glitzy lifestyles we see, hear, and fashion promote a narcissistic culture. Interestingly, there is no restraint on receiving glorious tributes directed at oneself (or one’s favourite idols) even if we/ they had not earned them.

While fame is attributed to the icons across disciplines who have distinguished themselves, it is the inordinate preoccupation with pride (read; ‘belief that you are better or more important than other people’) that is dangerous – because there is something ‘unreal’ about it.

There are many examples of people who have made it big and experiencing a fallout on achieving their goals. It could be a sense of smallness about themselves, although there might be much praise attributed to them by others. Or it could be a feeling of emptiness – a sense that their dream did not deliver their expectations. There is a whole range in which disappointment might set in. If people are honest and humble, the praise is often exaggerated beyond merits.

Legendary industrialist Lee Iacocca famously noted, “Here I am in the twilight years of my life still wondering what it’s all about… I can tell you this: Fame and Fortune is for the birds.”

Outspoken actor, filmmaker Woody Allen spoke with conviction: “I firmly believe, . . . that life is meaningless. I’m not alone in thinking this – there have been many great minds far, far superior to mine, that have come to that conclusion.”

Centuries ago a rich, famous and wise man was on a pursuit of accomplishment. He sought after pleasure, projects and achievements. His own drives and proclivities became the guiding principle as he was on self-gratification mode. Being a wealthy king, he had access to fame and fulfilment. But his post on his own exploits are disappointingly revealing. “Vanity, vanity says the king, everything is vanity. It is a mere chasing after the wind.” He however had other plans to fall back on. He set out to study everything under the sun – but yet again came around and uttered in despair – “Vanity, vanity…”

The Hebrew word Hebel translated as vanity (or meaninglessness) means breath, vapour and is also translated as ‘emptiness’, ‘nothing’, ‘delusion’, ‘fraud’ etc.

Contrast that ‘empty’ feeling with the Hebrew word for glory that is ascribed to God – which is expressed as hod, meaning majesty or splendour, denoting praise. Another word is kavod, which means to ‘be heavy’, ‘weighty’ and is hence important; depicting honour, majesty, glory. The word kavod was translated as doxa in the Greek Old Testament, while the word doxa also extensively occurs in the New Testament meaning judgement, opinion and also good reputation and honour. A book by C.S. Lewis captures the biblical import well: ‘The Weight of Glory’.

Contrasting the created ‘glory’ with the Creator’s glory, Lewis is very helpful again:

“The books or the music in which we thought the beauty was located will betray us if we trust  them; it was not in them, it only came through them, and what came through them was longing. These things—the beauty, the memory of our own past—are good images of what we really desire; but if they are mistaken for the thing itself they turn into dumb idols, breaking the hearts of their worshipers. For they are not the thing itself; they are only the scent of a flower we have not found, the echo of a tune we have not heard, news from a country we have never yet visited.”

Here is my submission: We need to worship that which is worthy. Jesus said, “they that worship God must worship Him in spirit and in truth”. A working definition of truth is that which corresponds to reality.

So we have two scenarios here – one, where that which is worshipped could leave a devotee with a sense of ‘emptiness’. The object of worship here could be anything other than the ‘real’ – it could be idols of the mind, one’s gifts and resources, or any deity. The second scenario is that we have a real God and one cannot help but worship Him.

But the tragedy is people sometimes miss the reality of God’s existence because of our finitude and our fallenness. Finite beings and things that we perceive through our sense organs appear real – but then how much more real would the Infinite One be, the One who created all of them! One needs to train one’s faculties to pick up signals and messages from the Real One. Important to add, there are many concrete ways in which God has spoken – through nature and His Scripture.

In Proverbs 23: 29-35, there is a description of the perception of reality that is illustrative:

Do not gaze at wine when it is red,
when it sparkles in the cup,
when it goes down smoothly!
In the end it bites like a snake
and poisons like a viper.
Your eyes will see strange sights,
and your mind will imagine confusing things.
You will be like one sleeping on the high seas,
lying on top of the rigging.
“They hit me,” you will say, “but I’m not hurt!
They beat me, but I don’t feel it!”

Wine in the Palestinian context those days was distinguished by its redness and in the Hebrew language ‘colour’ had a connotation of ‘eye’ or ‘appearance’. In the passage quoted above, scholars say it is suggestive that the wine in the cup had an ‘eye’ that was inviting – leading the gullible to be seduced by it.

There is a possibility for one to be intoxicated, to turn numb to reality. One could then see ‘strange sights’, fantasise adventure on the ‘high seas’ and deny the hard painful reality of hurt. There is a subjective side to realism that could be misleading.

The need is to integrate the subjective and objective sides of reality responsibly.

Jesus said: “I am the Way, the Truth and the Life.”

Philip asked Jesus: “Show us the Father!” Jesus answered, “He who has seen Me has seen the Father”.

A fascinating line in John’s gospel (John 1:18) captures a unique role played by God in His self-disclosure: “No one has seen God at any time; the only begotten God who is in the bosom of the Father, He has explained Him.” In other words, if you want to know the Infinite One, God, look at Jesus.

May we have eyes to see the glory of God!