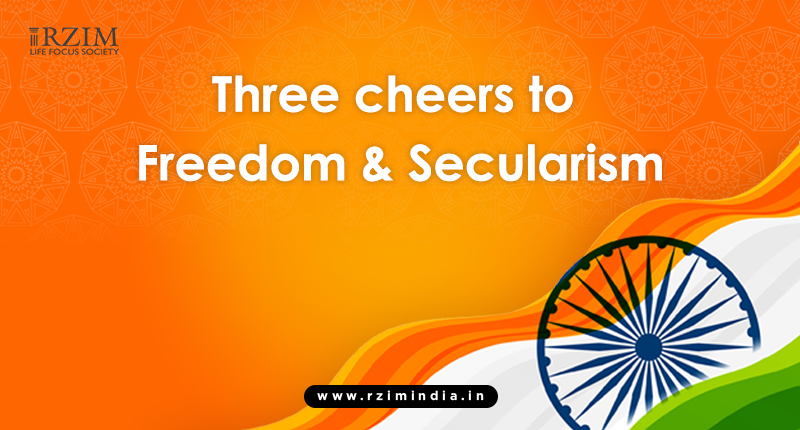 On the occasion of the 72nd Independence Day of our country, let us take a fresh look at the concepts of freedom and secularism. Pandit Jawaharlal Nehru it was who by his unflinching efforts established and practised secularism within the country’s democratic framework in the best possible manner. It’s to his credit he succeeded in defeating the communal forces in an effective way. A look at south Asia, where the cultural landscape is uniform, throws up the fact that no other country in the region has practised secularism in its finest form like India has done.

Dr. Vivek Kumar Srivastava writes to online readers of Mainstream “His belief in secularism was enriched by the emphasis on scientific analysis of the mundane order. From his dissection of communalism Nehru discovered that secularism was the sole response to the communal forces. Democracy and secularism are therefore twin siblings. This is what makes him an exceptional figure in human history. In contemporary India his idea on secularism are of utmost relevance when new clouds of fear, apprehensions and uncertainties are gathering over the nation’s horizon.”

Why is this important to the discussion on hand? Secularism, democracy, and freedom are ideas that, while we might not like it, were borrowed from the west who have all been heavily influenced by the Judeo Christian worldview. The Gospel transformed the west and that has in turn helped transform other parts of the world.

I came across a show that was broadcast on the NDTV channel on August 18, 2013, to celebrate 66 years of independence. The topic for the programme, if I remember correctly, was “A Dialogue on Nationalism.” The panelists were BJP leader Jaswant Singh, academician Professor Ashis Nandy, poet and Bollywood lyricist Javed Akhtar and senior journalist Swapan Dasgupta.

Jaswant Singh began the dialogue by confessing that Independent India adopted a European concept of nation, which had never existed in India: “I personally think that nationalism is an adopted word. It really got born as a concept in Westphalia, before that there were states. which is why until the East India Company came on the scene, there is not a single map of India that you can find. There is no map.” None of the other panelists disagreed. In fact, Swapan Dasgupta affirmed his view, saying: “I think the extent to which European influences have played a role in shaping India have subsequently been underestimated by a lot of people. In the first flush of freedom we thought that really we’ve achieved it ourselves. But the extent to which, what we are today, as being defined by the European influence, is tremendous.”

For a Christian the cause of Freedom can be drawn from the pages of the Bible. One objective of the early books was to reveal God in order to transform and liberate the 12 tribes of Hebrew slaves coming out of Egypt into one free and great nation in the land of Canaan. Thus, Indian Christians must continue to strive for the freedom of the oppressed within the sub-continent.

Further, we must also think about another kind of freedom, the freedom of eternal life. John 3:16 says, “For God so loved the world that he gave his one and only Son, that whoever believes in him shall not perish but have eternal life.” One word which is a powerful unifying factor is “Whoever” which includes every one irrespective of caste, class and cash. Let us strive to play a positive role as Indians to make this great nation livable for all.

Tikicus Polepaka, has a degree in Law and is Ministry Operations Manager in RZIM. He is based in Hyderabad.