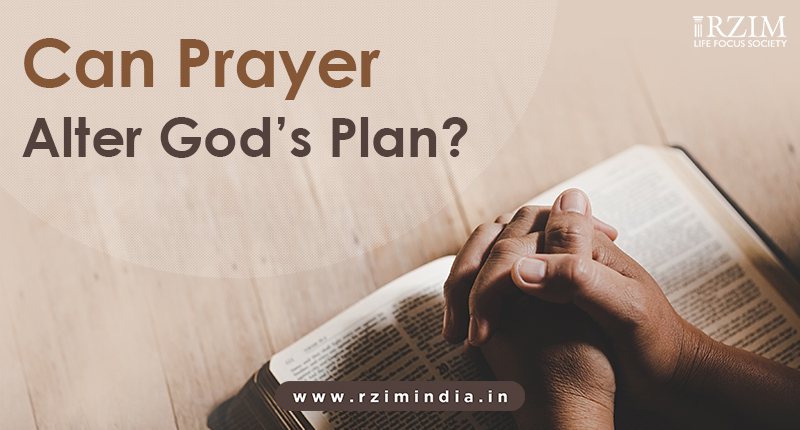 God always answers prayers; but He does not always grant prayers. There is, in a sense, no such thing as ‘unanswered’ prayer; only ‘un-granted’ prayer. This is so because prayer is a request, not a command. And like any other request, a prayer may or may not be granted. All of us have had experiences of not having some, if not many, of our prayers granted. This should not baffle us, for prayer is essentially a request.

The fact that God sometimes does not grant us our prayers also means that God is not bound to change His will or plan in response to our prayers. His will remains sovereign and His plan remains absolute, and, sometimes, not even prayer can change that.

But when God does grant us our prayers, does it mean that God, in so doing, changes His plans and purposes? Yes – and no. There are times when God alters a certain course of events in response to the prayers of His people. The Bible is replete with such stories. There are also times when God acts to bring about or create a certain situation in response to prayer. Again, the Bible is full of stories that demonstrate that fact. So, yes, prayer does ‘change’ God’s plans and purposes, or a certain ‘natural’ course of events.

However, to say that God’s plans and purposes can be changed by prayer is not the same as saying that they can be thwarted. An illustration: Suppose you are playing a game of chess with the World Chess Champion, Magnus Carlsen. Now, you would be ‘free’ to make any legal move on the board; Carlsen would simultaneously be making his moves in response to your moves. But whatever moves you make, and howsoever Carlsen ‘alters’ his moves in response, in the end, who will win? Whose will will be done? Whose plan and purpose will be fulfilled? The point is this: Carlsen will ‘incorporate’ all your actions and his ‘adjusted’ actions to still accomplish his overall plan and purpose. From the beginning, Carlsen’s purpose was to win the match; in the end, this purpose will be fulfilled, no matter what.

In a rather similar manner, God incorporates all our acts – including our acts of prayer and His corresponding responses – to fulfill His overall plan and purpose. No non-divine act or event – whether human or non-human; whether natural or spiritual; whether individual, geopolitical, or cosmic; whether satanic or saintly – can ever thwart or frustrate God’s overall plan and purpose for the world. Not even prayer can thwart God’s purpose.

But, of course, prayer is also not about thwarting God’s plans and purposes. ‘Thy will be done!’ is, after all, the essence of prayer. To pray is to partner with God in fulfilling, not frustrating, His plans and purpose. Another illustration: Suppose the Prime Minister of India is visiting Nagaland, and has landed at the Dimapur airport. His plan and purpose is to travel from Dimapur to Kohima. There are many ways he can fulfill that plan. He can take a chopper. He can take his standard prime-ministerial convoy. He can drive up by himself. He can even take a taxi or a bus. Or: You can offer – an offer that is also a request – to drive him up to Kohima in your old Maruti 800. Suppose further that, astonishingly, the PM takes up your offer (remember again, that in taking up your offer, he is also granting you your request) and you drive him to Kohima in your ramshackle car!

Now, after the rare and exhilarating experience, and all the private and personal chat that you had with him during the three-hour journey from Dimapur to Kohima, it would be quite a mistake on your part to start thinking and talking as if it was you and your car that caused him to or resulted in his travel from Dimapur to Kohima. It would be wrong for you to say, ‘You know, I told the PM to get into my car, and he listened to me and obeyed me. If it were not for me and my car, he would not have been able to come to Kohima.’ Such talk would be as embarrassing as it would be erroneous.

You see, you and your car are not irrelevant with regard to the PM’s travel; but neither are they causative or determinative. He would have come to Kohima whether you gave him a lift or not. By chopper it may be sooner; by bus it may be later. Moreover, it is not you who has helped the PM in fulfilling his travel plan. Rather, what the PM has done, in taking up your offer and request (i.e., your ‘prayer’), is that he has dignified you by allowing you to partner with him in fulfilling his purpose. Furthermore, your particular experience with the PM will affect and change you more than it will affect and change him.

Prayer is a little bit like that. God’s purposes are absolute, and there are many ways for Him to achieve His purposes. But when He grants us our prayers, it is about Him graciously and condescendingly allowing us to partner with Him in fulfilling His purposes – and be ourselves changed and transformed in the process.