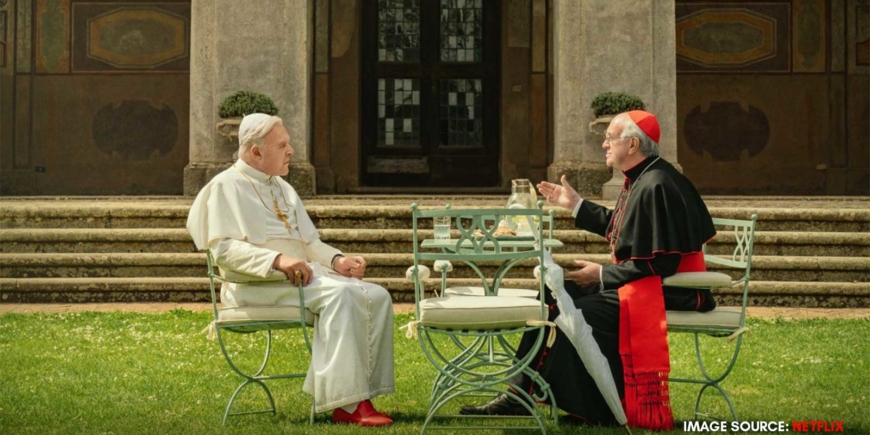 Lessons from the movie, ‘The Two Popes’

The movie ‘The Two Popes’ focuses on the interaction between Joseph Ratzinger (Pope Benedict XVI) and Bergoglio who later becomes Pope Francis. The interaction takes place around the time that Pope Benedict the 16th decides to retire. What is striking about this exchange is the way in which these two great men who have opposing views on almost everything come to love and respect each other. It is a telling tale of two men coming to terms with God’s greater purposes for them personally and for the world at large.

A Quick Synopsis Of The Movie

The movie starts with Bergoglio leaving for the Vatican at the invitation of Pope Benedict XVI. Bergoglio wishes to resign which would have made it very convenient for Ratzinger, but he chooses not to sign the resignation for though he cannot fully comprehend it, he feels God has a greater task for Bergoglio and the future of the Catholic Church. At first you see that both men are always at odds with each other all the time. Their personalities and backgrounds too are very different. Pope Francis from Argentina who takes his name from Francis of Assisi has given himself to the cause of the poor and the oppressed, he is a simple man who desires a simple life. While Joseph Ratzinger on the other hand is a sophisticated man and an exceptional intellectual from Germany. He has written a number of books and his works are studied in seminaries across the globe. But as the two men spend more time with each other they begin to accept the other as God’s anointed one, even as they continued to disagree with each other’s views.

This is an extraordinary exchange, one that can only come from God and need God’s grace to come about. To accept another and see God’s greater plans in and through another person even if you are unable to accept their views, that is much more than mere toleration. That is listening to the heart of God and being obedient to it even though our cognitive faculties might struggle against it. At the end of the movie we see real life footages of the two Popes embracing each other.

Similar Traces From The Book Of Acts

We see a very similar instance in the book of Acts between Peter and Paul. In Acts 9:26 it says, “When Saul arrived in Jerusalem, he tried to join the disciples, but they were all afraid of him, not believing that he was a disciple.” Paul was proclaiming a message which was difficult for Peter and the rest of the disciples to accept. Circumcision and dietary laws were as old as Judaism itself and Paul was deeming these unnecessary for the gentiles to come to Christ. Added to this Paul’s background and personality were completely different from Peters. Peter was a fisherman, spoke with a rustic accent and had no formal education. Whereas Paul was a brilliant man, highly educated and refined. Peter was with Jesus during his ministry, Paul on the other hand had never even seen Jesus while he was alive and later persecuted many of those Peter might have known. But by the end of the Jerusalem council in Acts 15, we see Peter not just tolerating Paul’s vision but supporting it by choosing men to accompany him to Antioch. Though Paul’s vision, personality and background were in stark contrast to that of Peter’s, Peter accepts Paul as God’s anointed and convinces the others of the same. I mean what would the future of Christianity be if Peter and Paul had stuck to their preconceived notions and didn’t budge an inch!

What Can We Learn From This?

I guess there is a very important lesson in here for each one of us. We sometimes hold so strongly to our own ideas and demonise those who hold views which do not match our own. We refuse to give them a listening ear because we feel that nothing they say can ever change our minds about what we already know to be true. The theologian Paul Tillich says that the first duty of love is to listen. To truly listen to another is an active process, not a passive one. If God is the one who ordains our lives then it is perfectly possible for Him to speak to us through people whose views do not align with our own. They can be channels through which God breaks into our stubborn hearts. This is what Joseph Ratzinger writes in his book ‘Jesus of Nazareth’, “With the petition “thy kingdom come”(not “our Kingdom”), the Lord wants to show us how to pray and order our actions in just this way. The first and essential thing is a listening heart, so that God, not we, may reign. The Kingdom of God comes by way of a listening heart. That is its path and that is what we must pray for again and again.” Concluding thoughts

In a world where people are not able to tolerate another’s views, much less accept as valid, ‘The Two Popes’ helps us understand that God is actively working in every interaction. When we develop a listening heart, we begin to realise that He is always teaching us. It is easy for us to be encouraged and accept words from people whose views more or less align with our own. But it is virtually impossible to do that with people whose views do not. Yet that is the way we grow. As Ratzinger writes, “the Kingdom of God comes by a listening heart.” So, the next time you are with someone from office, church, family or neighbourhood and they say something that you do not agree with, ask yourself the question, “Is God trying to tell me something here, even though I find it hard to accept what they are saying?”. May God grant each one of us a heart to listen.