Posted in Good FridaySuffering
Home Page
>
Good Friday
>
The Last Words Of A Dying Man
Posted on April 9, 2020August 11, 2020
by Neil Vimalkumar B 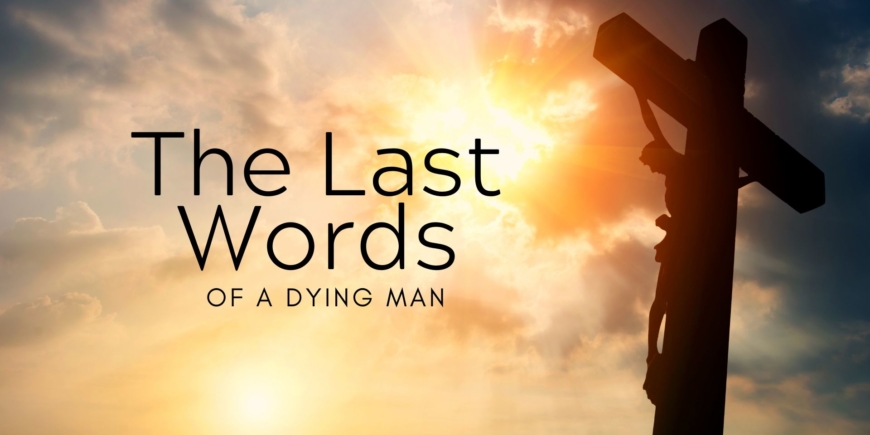 The death of Jesus Christ on a Roman cross two thousand years ago continues to inspire people irrespective of their religious persuasions. It might be said without exaggeration that more than mere inspiration, many have found the cross to be enigmatic.

As he hung on that cross, Jesus is known to have uttered seven lines before breathing his last. What is the unique message that He articulated in those dying moments? Os Guinness, social critic, famously said, “Contrast is the mother of clarity”. Here are those words and how they can be distinguished from other popular ideas.

1. “Father, forgive them; for they do not know what they are doing”.

In a culture where an eye for an eye and a tooth for a tooth seems fair, Jesus taught that one should “love your enemies, do good to those who hate you, bless those who curse you, pray for those who mistreat you. If someone slaps you on one cheek, turn to them the other also. If someone takes your coat, do not withhold your shirt from them”. (Luke 6: 27 – 29). Beyond giving mere discourses, He lived it out in the midst of excruciating pain. He prayed to His heavenly Father for forgiveness for His tormentors.

2. “Today, you will be with me in paradise”. Jesus said these words in response to one of the thieves who was also hanging on a cross beside him. This thief realised his failings as well as the innocence and godliness of Jesus and sought His mercy. Forgiveness; not getting the penalty we deserve, and grace; getting the blessing that we don’t merit, are at the heart of Jesus’ message.

3. “Woman, here is your son; Son, here is your mother”. Jesus is concerned about His mother and entrusts her to the care of his friend and disciple, John. The spirituality that Jesus taught includes this world and all relationships here. It is not an esoteric, ‘other-worldly’ experience alone, but addresses all aspects of life, family, physical activity and recreation.

4. “My God, my God, why have you forsaken me?” Here is a cry of desperation. The sin and rebellion of human beings have had serious consequences. It seems to have ruffled even the Son of God. It is certainly unusual that a God would suffer and agonise, let alone die for a fallen humanity, while even our celluloid ‘heroes’ come off looking superhuman evading death.

5. “I thirst”. Jesus experienced severe thirst. Here was a God who truly became physical and experienced all human emotions and hungers. He presented a wholistic spirituality that included the physical dimension, affirming it.

6. “It is finished”. While one would have waited to hear those words from the Roman centurion that the job of crucifixion was over, we hear the ‘victim’ declare, ‘It is finished’. Please note, Jesus did not say – ‘I am finished’, but rather that the task he had set out to do was done. In a culture that is pre-occupied with lifestyle, Jesus exhibits a death-style.

7. “Father, into Thy hand I commit my spirit”. While a typical response to imminent death might be sorrow, fear or uncertainty, Jesus hands over his life to His Father at his physical death. The biblical worldview is very emphatic in its expectancy of life beyond death.

No wonder, the well-known 1st-century Christian theologian, Paul, wrote: “We preach Christ crucified, … the power of God and the wisdom of God”.