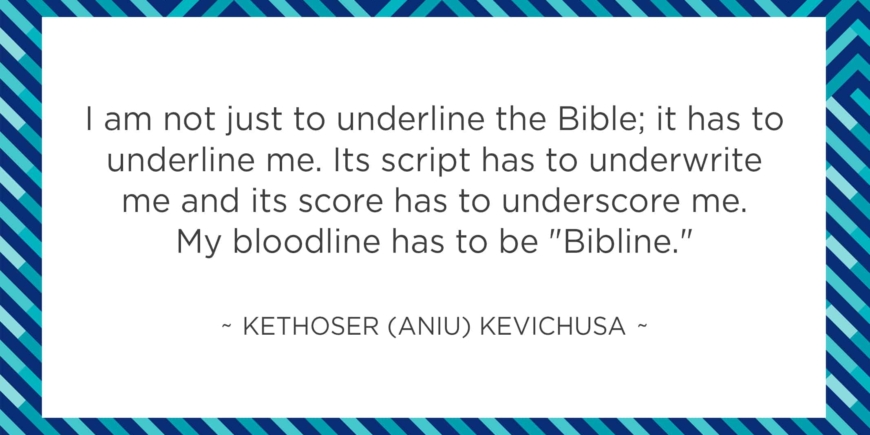 Tucked away among the many books on my dusty shelf is the first Bible that I really owned and truly read—my New International Version. This Bible not only tells the story of God and the world, but also my story: for, like me, it is smudged, smeared, speckled, soiled, smirched, stained, scratched, splodged, and scarred. (And that is just the letter ‘s’!)

This inexpensive Bible was actually gifted to me by my parents before I became a Christian. For long, it just sat there, dead to me and I to it. It was only after an experience in November 1992 that I picked it up and began to read.

And then—it was different! Not unlike a piece of rock that suddenly comes to life, or a Labrador Retriever that suddenly begins to appreciate Bach and Beethoven, the miracle of Christ suddenly made me alive to the truth, beauty, and goodness of the words therein. I was now alive to him as he was to me. I could not put the Bible down, reading it, marking it, clasping it, preaching it, crying with it, and singing of it.

Reflecting on what this old Bible has done for me, three words come to mind: Informing, Indwelling, and Immersing. As I read and re-read this Bible for the first years of my Christian life, I began to realize that its “new words” spoke of a “new world” through a new Person who was suddenly real to me. This One was actually informing me of another world and another reality—a world and a reality I never knew existed. This new world—of God and Satan, angels and demons, heaven and hell, sin and salvation, wisdom and folly, and oh so much more—was a world that I never knew was there, let alone believed.

But like a new piece of information in a crime mystery novel that suddenly changes the narrative, plot, and meaning of the whole novel, the Bible’s new reality supplied me information that enabled me to “read” the story and “see” the meaning, both of my life and the world, in a completely new and different way. This Person I encountered in the pages supplied me vital information about the most basic questions of life: “Who am I?” “Where am I?” “What is wrong with me and the world?” “What is the solution?” “What is the meaning of life?” “Where is the world heading?”

But this book went beyond informing me. Through it, God also invited me to indwell its story and its world. It slowly, yet no less startlingly, dawned on me that I was part of the biblical story through Christ—called to play my small part in the unfolding drama that spanned from the creation story of Genesis to the new creation of Revelation.

I began to realize that my task as a Christian was not just about being informed by the Bible and then correlating that information with contemporary situations. It was not simply a matter of learning precepts, principles, and paradigms from the Bible and then applying them in present-day life. It was, rather, a summons to join the unravelling story of the world as told by the God of the Bible, learning Christ’s internal logic, finding my place and playing my part in his story, as he moved towards the logical, hopeful end promised by God.

Like a nameless, faceless foot soldier in an epic war movie, I found myself among the rank-and-filers of the biblical story. God’s story, I realized, was our story, my story. I may well be unknown by humankind, but I am part of the plot and plan, counted by angels, known unto God.

This indwelling of the biblical story was neither easy nor early. It came through a slow, continual and intentional, immersing of myself in the Bible. I had to immerse myself in the Bible and the Bible had to be immersed in me—reading and studying God’s vision chronologically and thematically; binding myself to reading and study plans; praying God’s prayers; crying God’s tears; singing God’s songs; obeying God’s summons; alas, repeating the Story’s sins; and, yes, responding to its Savior and relying on his Spirit.

Experienced musicians immerse themselves in the given musical score, and seasoned actors immerse themselves in the playwright’s script. In a similar manner, I realized that I am also required to commit myself to a lifelong journey of immersing myself in the biblical script. It is only by “soaking” myself in the Bible that I become intimately familiar with God’s voice and gain a deep, intuitive sense of the movement of Christ’s story. I am not just to underline the Bible; it has to underline me. Its script has to underwrite me and its score has to underscore me. My bloodline has to be “Bibline.”

Through it all, it has been a scarring journey and wounding experience. Needless to say, I often falter and bungle. But I surprise myself that I am, somehow, still standing. Standing, because I have been held together by the loving and healing hands of the Love that will not let me go—not unlike the sticking plaster that adorns the spine of my old New International Version, just far more personal.

Originally published in A Slice for Infinity https://www.rzim.org/read/a-slice-of-infinity/my-old-new-testament