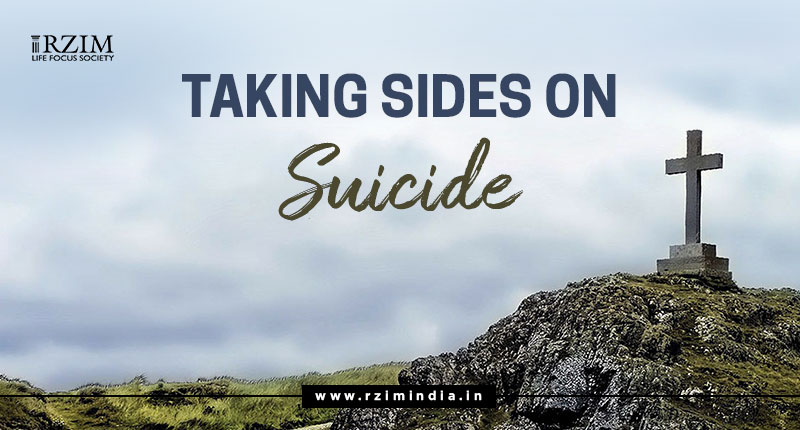 Suicide is the deliberate and voluntary taking of one’s own life. Suicide or attempted suicide is motivated by several factors. It may be in order to escape intense purposelessness or hopelessness. Despair, pain, guilt, fear of impending danger or punishment, anger and revenge (in order to inflict pain and guilt on others), shame and honour, self-aggrandizement, or even a desire to reach the afterlife can be behind suicide. Sometimes it can happen “accidentally” – that is, by engaging in risky acts or behaviours (such as, say, cutting oneself) that actually result in death. Suicide can sometimes be motivated by altruism, in order to achieve a higher goal (e.g., suicide missions in times of war).

Since the times of the Church Fathers (second century onwards), Christianity has traditionally considered and taught suicide to be morally wrong. Standing in the tradition of the Church Fathers, Augustine (AD 354 – 430) says, “For if it is not lawful to take the law into our own hands, and slay even a guilty person, whose death no public sentence has warranted, then certainly he who kills himself is a homicide” (City of God, I.17). Suicide, in other words, is considered wrong because it is a form of homicide, and, as such, is a violation of the Sixth Commandment, “You shall not murder.” That suicide is morally wrong has been the standard, traditional teaching of Christianity.

There have, however, been arguments, including arguments by Christians, that have challenged the traditional view. Let us consider a few arguments for suicide in thumbnail, and respond to each, again in thumbnail.

Firstly, there is the argument from the death of Jesus himself. For example, the poet and clergyman John Donne (1571–1632), in his posthumously-published essay on suicide, Biathanatos,saw the death of Jesus Christ, who “lay it down of my own accord” (Jn. 10:18), as a form of suicide.

Related to the first is, secondly, the argument that martyrdom is a form of suicide. And if martyrdom is generally commended, then suicide should not be condemned, but at least condoned.

Thirdly, there are some who invoke passages such as 2 Corinthians 5:2, where Paul talks about “longing to put on our heavenly dwelling,” and Philippians 1:21-23, where he talks about his desire to depart and be with Christ and also says “to die is gain,” for the moral permissibility of suicide.

These passages must however be interpreted carefully, and interpreting them to argue for the permissibility of suicide is not only incorrect, but also irresponsible and dangerous. It must also be remembered that, even if it were the case that Paul desired to die and be with Christ, and even if he considered death as gain, he still did not actually commit suicide.

Life is not God, but

Fourthly, it is sometimes said that since life is not “God,” it cannot be revered as ultimate, absolute, and inviolable. Hence, suicide may be morally permissible.

Now, while life is most certainly not “God,” it is God who has ultimate right over it. In his Church Dogmatics, the theologian Karl Barth says, “Life is no second God, and therefore the respect due to it cannot rival the reverence owed to God.” But he immediately goes on to say, “[T]he life of man belongs to Him [God]. He has granted it to him as a loan. And He decides in what its right use should consist” (Church Dogmatics IV/3).

In response, it could be asked how and why “the right to choose” is the pre-eminent, ultimate, and absolute good or ideal that trumps all other goods and ideals (such as the goods of life, perseverance, character, faith, hope, love, and so on). Indeed, it could even be said that if a person’s right to choose is an inviolable right and good, then suicide violates that right and good precisely by taking it away through killing oneself – after all, a dead person no longer enjoys the right to choose.

Finally, there are those who argue that suicide in exceptional cases is the outcome of extreme conditions (such as, severe mental illness) over which a person has no effective control. Thus, one cannot be held morally responsible for committing it.

To be sure, there is some truth to this argument. But it must still be remembered that such exceptional cases prove the rule. Suicide by mentally ill persons may be exceptional. But that does not make suicide in any and all cases morally permissible, let alone normative. It is “exceptional” precisely because there is a rule (namely, the rule that it is wrong to commit suicide and that one should not commit it); otherwise it would not be “exceptional.”

These arguments for the permissibility of suicide are strong. But they are not altogether insurmountable.

But it might still be asked: What does the Bible itself say on suicide?

Rather surprisingly, in the Bible, direct prohibition and explicit condemnation of suicide is conspicuously absent. The Bible contains at least five stories of clear suicide: Abimelech in Judges 9:50-56; Saul in 1 Samuel 35:1-5 and 2 Samuel 1:5-16; Ahithophel in 2 Samuel 17:23; Zimri in 1 Kings 16:18-19; and Judas in Matthew 27:3-10. (The question of whether or not Samson’s death was a suicide is debated by scholars and commentators.) The Bible certainly does not commend these suicides; but neither does it explicitly condemn them. But the narratives in all of these cases are descriptions and depictions of tragic and catastrophic circumstances that precipitated suicide.

Even if the Bible does not explicitly condemn suicide, a biblical case against suicide can be made on the following grounds: “You shall not murder” (Ex. 20:13). Genesis 9:6 prohibits the shedding of human blood “for God made man in his own image.” The Bible commands and urges humans to “choose life” (Deut. 30:19). The Apostle Paul prevents the Philippian jailer from committing suicide: “But Paul cried with a loud voice, ‘Do not harm yourself.’” (Acts 16:28). The Bible also teaches that our bodies are the temple of the Holy Spirit and that we are not our own (1 Cor. 6:19). The Bible also contains and commends countless stories of patience and perseverance in the face of extreme pain, suffering, seeming hopelessness and despair (e.g., Job, Jesus, Paul, and others).

But most of all, the Cross and the Resurrection reveals that life at its most unbearable is still redeemable.

With regard to the tragic suicides of those “in Christ,” the Bible is again silent. So too should we hold our peace – except only to cling on to what our Lord has said: “I give them eternal life, and they will never perish, and no one will snatch them out of my hand” (Jn. 10:28). And clinging on to that, we may even dare to whisper, “Nothing will be able to separate us from the love of God in Christ Jesus our Lord” (Rom. 8:39).