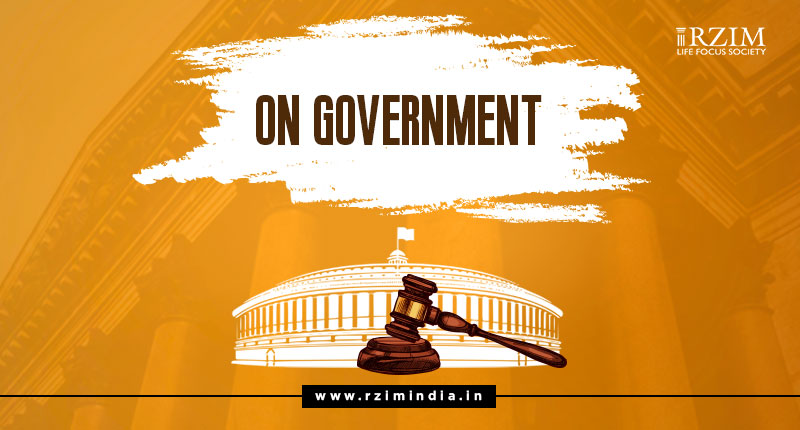 Romans 13:1-7 is one of the most misunderstood, misinterpreted, and misused passages in the whole Bible. But read carefully, it can be mined for the ore vein of great biblical truths about “government”: its identity, its authority, its duty, and its accountability.

From a biblical perspective, the opposite of sacred is not secular; it is sin. Government work is sacred work and government authorities are God’s servants. As John Stott puts it, “Those who serve the state as legislators, civil servants, magistrates, police, social workers or tax-collectors are just as much ‘ministers of God’ as those who serve the church as pastors, teachers, evangelists or administrators.”

As God’s servant in its identity, government bears God’s approval in its authority:“For there is no authority except from God, and those that exist have been instituted by God. Therefore whoever resists the authorities resists what God has appointed” (vv.1-2).

But what it does mean is that government as such– that is, as an institution – is authorised, instituted and appointed by God. N. T. Wright puts it as follows: “The Christians are called to believe, though, that the civic authorities, great and small, are there because the one true God wants his world to be ordered, not chaotic. This does not validate particular actions of particular governments. It is merely to say that somegovernment is always necessary, in a world where evil flourishes when unchecked.”

The primary way in which government validates its identity and justifies its authority as God’s servant is when it discharges its duty of doing justice. The justice that government is meant to discharge is: (a) distributive justice; and (b) retributive justice.

Distributive justice is about seeking the common good of the people and distributing goods fairly and equally. Paul says that government is God’s servant “for your good” (v.4) and that government’s duty is about “attending to this very thing” (v.7), serving God through the just collection and distribution of goods.

Retributive good is about correcting wrongdoing and commending right-doing. Paul says that government’s duty is to act “as an avenger who carries out God’s wrath on the wrongdoer” (v.4). He also says, “[D]o what is good, and you will receive his approval” (v.3).

Finally, implicit in the whole passage is the truth about the accountability of government. Because it is God’s servant in its identity; appointed and instituted by God in its authority; and authorised and charged by God for justice in its duty, government is ultimately answerable to God in its accountability.

The passage is not just about the legitimising of government; it is also about the downsizing of government. It cuts down to size government institutions, authorities, and personalities that become idolatrous by becoming a law unto themselves. It does so by reminding them that they are under God. As Francis Schaeffer puts it, “The civil government, as all life, stands under the Law of God.”