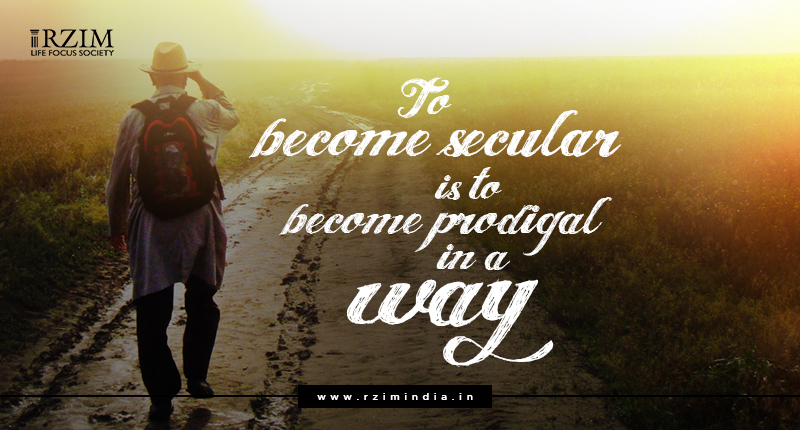 A helpful way to understand secularity is to see it as the prodigal child of Christianity. It helps not only by giving a location to the “secular”, but it also provides a way to make sense of the cultural conflicts that increased secularization brings. In its infancy, the term “secular” was used primarily to differentiate between the mundane tasks, such as farming, plumbing, or playing from the sacred tasks, such as, worship, baptism, or ecclesial liturgy. Irrespective of whether we now think that such a separation is warranted or not, we can understand the rationale for such a categorization within its historical context.

From being an internal ecclesial classification, “secular” has now come to be understood as “exclusion” of religious belief, especially in the West. Alongside this morphing of the meaning of the term, the secular as a movement has now reached the stage of rebellious adolescence, where it is understood as being against religious belief.

Viewing the “secular” as the prodigal child of Christianity, we can detect that the secular gathers all that “rightfully” belongs to it—the cultural and moral import of the Judeo-Christian worldview: the incontestable value and rights assigned to each individual, the conception of self as a volitional being, and (despite how strange it may sound today), conceiving frugal living and humility as virtues etc.— and walks. It embarks on a journey of ideological alienation from the family of Christian orthodoxy.

The Secular Age and the Loss of Transcendence

But one may argue, ‘well, in every cultural milieu, we find opposition to orthodoxy. Why then should we isolate contemporary secularity as the prodigal child?’ Charles Taylor argues that contemporary secularity is unique precisely because “unbelief” is naturalized within the contemporary culture as in no other. He writes, “For the first time in history a purely self-sufficient humanism came to be a widely available option. I mean by this a humanism accepting no final goals beyond human flourishing, nor any allegiance to anything else beyond this flourishing. Of no previous society was this true” (A Secular Age, 18). This is unique to a secular age.

The secular age is uniquely a prodigal child because of a condition, which Taylor calls, “exclusive humanism.” Exclusive humanism dispenses with the very idea of transcendence and thus along with it, dispenses with the idea of God, the idea of the miraculous and of a divinely instituted moral order. In short, it redefines all of life purely within the framework of immanence. Elaborating on the reception of religious belief, or the lack thereof, within a secular age, James K A Smith elaborates,

The standard picture, we might say, sees religion as a sort of addendum to being human: all humans eat, sleep, breathe, have sex, wear clothes, are citizens of some nation, and engage in play. Then, in addition to that, some (perhaps even many) homo sapiens are ‘religious’: they are ‘believers’ who participate in religious rituals and practices, identify with religious communities, and hold religious beliefs. These beliefs and practices are generally taken to be tied to certain established traditions and institutions (Buddhism, Christianity, Islam, etc.). Those who study ‘believers’ are often those without this extra-human supplement: they are ‘just’ human, that is, ‘secular.’ ‘Believers,’ to them, are kind of exotic; they have conspicuous growths, like two heads. From the perspective of the secular scientist, who lacks such growths (who has been healed of such lesions, as it were), this religious addendum is a curious supplement to being human—a kind of deformation. (See, James K A Smith, “Secular Liturgies and the Prospects for a ‘Post-Secular’ Sociology of Religion”).

The secularist therefore zealously commits himself to the task of exorcising religious belief from the public spaces and discourses. Paying homage to his modernistic beliefs and committed to the enlightenment dogma of “pure reason”, this exorcist commissions himself as the apostle to (to use Taylor’s phrase) disenchant the world.

An obvious blind spot that rationalizes the undermining of religious belief is an erroneous presupposition that religious beliefs and practices are detrimental and certainly not necessary for human flourishing. Hence, if at all allowed, it ought to be relegated to one’s private life.

However, as James Smith argues, what the secularists fail to recognize are the faith-like epistemic framework and the “secular liturgies” that operate within their anti-religion calculus. Worldviews that are presupposed are nothing short of beliefs, which are religious in its form. And with increased secularization, Christian beliefs, for historical reasons, have come straight in the line of fire of the liberal exorcists.

Connecting back to the story of the prodigal, the process of prodigalization, first and foremost, pertains to belief itself. Viewed from Orthodoxy, the process involves a choice (of the culture as a whole), to walk away from its household of faith. This creates a condition of brokenness and unhappy separation, leaving orthodoxy with a sense of loss, even mourning. The secular, on the other hand, celebrates its newfound freedom from the clutches of Judeo-Christian morality.

Unfortunately, the conservative Western culture has often displayed a resentful attitude of the older brother, who is filled not with concern over the loss of a brother but with scorn and hatred toward the prodigal. One is left to think that such hatred combines an explicit self-righteous attitude with an implicit ‘he’s having all the fun’ sort of gripe. This has led to an obsession with the hatred of cultural expressions of the prodigal.

However, there is also the haunting memory within the prodigal of how life used to be within the Father’s household. There is a tacit acknowledgment of the loss of transcendence and what that implies to human significance, purpose and meaning. We thus have a prodigal who is nostalgic about the past.

The audible secularist voices that express such nostalgia, unintentionally announce the advent of the “post-secular”. Voices such as that of Alain De Botton’s, in acknowledging the loss of a culture, take upon themselves the task of filling the void left by the absence of transcendence. Driven by nostalgia, the secular philosopher is tempted to claim the position of the chief priest, called to his spiritual service as the culture suddenly senses that with the dismantling of God, it has also obliterated the framework for moral reasoning.

Botton’s Religion for Atheists is an effort to redeem the virtuous aspects of religion– the sense of community, respect for the other, kindness and love, etc., but entirely from within the logic of immanence without the “baggage” of those strange religious doctrines about the supernatural and the transcendent God.

The Power of Human Liturgies to Shape Us

There are pivotal issues beyond direct acknowledgement of the absence of transcendence. To understand this, James K A Smith summons us to look beyond religion. He asks us to look at anthropology and acknowledge how we are inescapably “liturgical animals.” Looking at “secular liturgies” not only helps us recognize that we shall never get rid of liturgies and a heart of devotion, but also helps us understand how we take the shape of the object of our worship!

The reasoning is this. If humans are structured in such a way that we are essentially lovers and worshippers, the dismantling of the transcendent God merely replaces God with something else; only that what we replace it with is from within immanence. It is a way of making idols. But to have idols, we need myths. A Secular Age creates its idols and weaves its myths, for they are mutually interdependent categories.

So then, if “at core”, as Thom Wolf argues, “every worldview is a worship view. Also, every worldview or worship view creates . . . a worldvenue: core ways of conceiving the world result in regularized ways of conduct in the world” (Wolf, “Progress-Prone and Progress-Resistant Cultures”, 40), then nothing has the power to shape our lives and societies as gods do, as the object of human worship. Likewise, Moltmann argues that our imaginations of earthly kingdoms / governments are not too far off the mark from our imaginations of the kingdom of God (See The Trinity and the Kingdom). In short, we are inescapably lovers and worshippers and the object that evokes our greatest admiration has the power to shape us. But that is both magnificent and tragic at once!

While secularity may have dispensed with belief in a transcendent God, it hasn’t dispensed with the liturgical human nature. This calls us to examine not whether we have an object of worship or not, we all do. Rather, it calls us to examine the shape and character of the object of our worship and whether it deserves our devotion. The replacement of the transcendent God with something far too inferior might just be the greatest tragedy of the secular age.

The article by Dr.Varughese John was published in Engage October-December 2016. He is currently the RZIM Chair of Apologetics at SAIACS, Bangalore