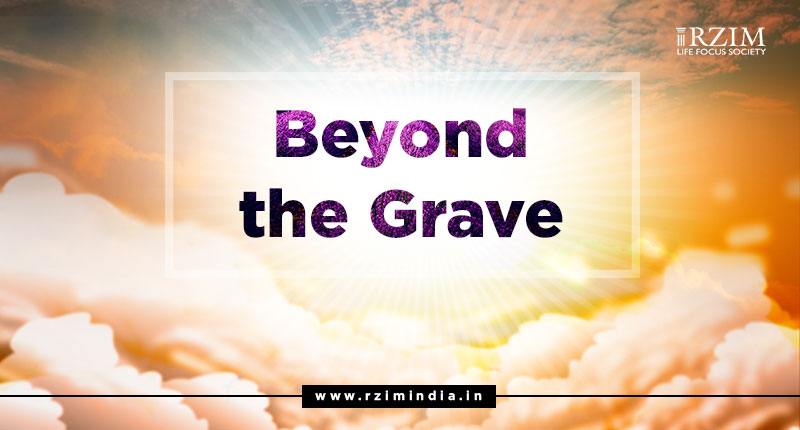 We wrestle with many fears on a daily basis: rejection, loneliness, ridicule, failure. However, for most of us, the greatest fear we face is death. What will happen when I die? What awaits me? Will it be good or bad, painful or pleasant, will I continue to exist in some form or will I cease to exist? The uncertainty of what will befall troubles us. Philosopher Paul Tillich says everyone has to come to terms with the “threat of non-being.” For though we know that we exist and that we are alive, we also know that someday we will no longer be, that we will all die.

Amidst life’s joy, fun and laughter, there is a yearning for something more. It is a fact of our material existence that all beauty fades. The flowers that adorn our homes will wither away. Those crowned as most beautiful will cede their crowns. The most powerful rulers who once terrorized their subjects will relinquish their thrones. We are constantly reminded of life’s brevity. A dear friend dies. A relative fights a terminal illness. Another natural disaster occurs. We are forced to wonder if everything ends with the grave, or if something more awaits.

Analytic philosopher William Lane Craig captures this thought. “If God does not exist, then both man and the universe are inevitably doomed to death. Man, like all biological organisms, must die. With no hope of immortality, man’s life leads only to the grave. His life is but a spark in the infinite blackness, a spark that appears, flickers, and dies forever.”[1]

Easter commemorates the victory of life over death. It is the true story of Jesus Christ, God incarnate who conquered death by rising from the grave. His claims to deity along with His growing popularity among the people quickly turned the religious leaders against Him. In just three short years Jesus became a public figure, challenging the religious institutions with His teachings on morality, ethics, and righteous living, and provoking the religious leaders to jealousy and anger. They plotted against Him, but found no charge worthy of conviction except His claim to be God which ultimately brought about His crucifixion. Three days later history changed forever.

The ancient historian, Luke, documents the visit of a few women carrying spices to the tomb where Jesus was buried to finish the Jewish burial customs. They approached, wondering who would roll the gigantic stone away from the entrance so they could go in. To make matters worse, Pontius Pilate, the Roman governor, had ordered Roman soldiers to guard the tomb. Since Jesus was a popular religious figure, Pilate didn’t want anyone coming to steal the body and spread rumours that He had risen. Upon arriving at the grave, the women found the stone was already rolled away, the soldiers were nowhere to be seen, and the tomb was empty. They were perplexed and distraught. What had happened to their beloved Jesus? Luke continues his narrative, detailing how the women reported seeing Jesus alive. He had risen, and soon the news of what they had witnessed spread. It was not just these women, but Jesus’s disciples too reported encounters with the risen Lord.

Irrespective of their own views on the resurrection, the vast majority of scholars accept that (i) Jesus died due to Roman crucifixion and (ii) very soon afterwards, a number of Jesus’ disciples had experiences that they believed were appearances of the risen Jesus and (iii) the tomb was empty.

What best explains these historical facts? It is highly unlikely that the report was fabricated. Women are reported to be the first eyewitnesses of the empty tomb. At the time, women’s testimony was considered worthless, not even admitted into a Jewish court of law, so any later invented story surely would have men discovering the empty tomb. On this point N.T. Wright says, “If [the early Christians] could have invented stories of fine, upstanding, reliable male witnesses being first at the tomb, they would have done it.”[2]

The Gospel of Mark was written only about a decade after Jesus’ resurrection, so those reported to have witnessed the risen Jesus could have easily denied it. Similarly, the early Gospel creedal tradition that Paul refers to in 1 Corinthians 15:3-7 lists multiple appearances of the risen Jesus including three group appearances. Many of those recorded as seeing the risen Jesus would have still been alive at the time of his writing and could be consulted for corroboration.

The allegation that Jesus’ body was stolen by the disciples would seem like a good alternative to the fabricated story because it would account for the empty grave and the rumour that He had risen. So all that sceptics had to do was find Jesus’ body and the so-called Christian movement would be crushed. Further, the religious and political leaders ensured that the tomb was well guarded, making it impossible to steal the body. The Roman soldiers charged with guarding the tomb were some of the most highly trained fighting force in the world. The penalty for failing to guard a prisoner or for falling asleep on duty was death. These soldiers had every reason to stay wide awake.

Could it be that the disciples were hallucinating? The evidence doesn’t seem to suggest so because Jesus appeared to individuals and groups at different times and settings over a period of 40 days, at one point even appearing to 500 people at once. Even Gert Demann, the leading German critic of resurrection, himself admits, “It may be taken as historically certain that Peter and the disciples had experiences after Jesus’ death in which Jesus appeared to them as the risen Christ.”[3]

The discovery of His empty tomb, His post-death appearances, and the origin of the disciples’ belief in his resurrection are facts agreed upon by the majority of scholars who have written on these subjects, and any adequate historical hypothesis should account for all three. The hypothesis that Jesus rose from the dead far outstrips any of its rival hypotheses. Harvard Law Professor Dr. Simon Greenleaf says, “According to the laws of legal evidence used in courts of law, there is more evidence for the historical fact of the resurrection of Jesus Christ than for just about any other event in history.”[4]

One songwriter sums up the day’s events with these lines:

Vain the watch, the stone, the seal
Christ has burst the gates of hell;
Death in vain forbids him rise,
Christ hath opened paradise.

History tells us that all of Jesus’ disciples were persecuted and all but one martyred. The disciples were willing to risk their lives and livelihood to tell the tale to countless people around the world. These very disciples were the ones who on that that fateful night in Gethsemane fled for their lives as their Lord was taken away. They were frightened, confused, dazed, disoriented, and disheartened. Following His death, they stayed behind closed doors fearing for their lives. They truly believed that Jesus was dead and that they would never see Him again, their faith buried with the corpse of their Master. So what explains the disciples’ radical transformation from fearful followers to fearless witnesses, proclaiming the good news of the resurrection? The political scenario and religious establishment haven’t changed. The crowd that demanded his crucifixion and the soldiers who carried it out are still around. Then what changed? They have encountered the risen Lord who conquered death and the grave, dispelling all fear.

If Jesus rose from the dead, there is indeed hope. Hope in the midst of pain, grief and loss. Hope that conquers fear, death and all else. And so, we don’t have to fear death. We can know what awaits. We can have hope that because God defeated death, we too can live beyond the grave.