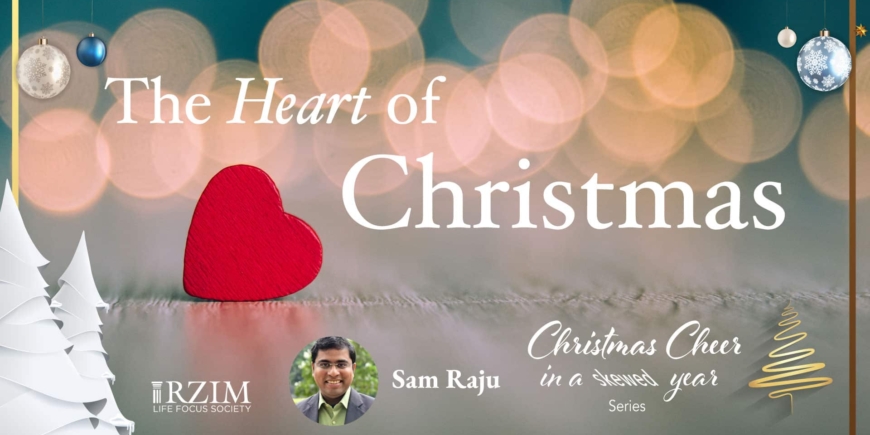 When you think of Christmas what comes to mind? The jovial Santa, trees lit up, traditional carols and giving of gifts have come to represent the season we celebrate. The streets once dark and dull now brightly lit, the empty corridors crowded and beaming with life. All seem to come alive with music, lights, and festive decorations. But the true spirit of Christmas lies much deeper.

It is found in the gift of the incarnate God, the beneficent Saviour whose birth was heralded as Good News of great joy for all people. Christ the Lord was born! The infinitely great, holy, and righteous God, once unapproachable and invisible, became knowable, approachable, visible, and tangible. Speaking of God’s eternality, C.S. Lewis wrote if you picture time as a straight line along which we have to travel, then you must picture God as the whole page on which the line is drawn. We come to parts of the line one by one, but God contains the whole line. In other words, God contains time and space. The beauty of the Christmas story is that this God who transcends all limitations, the Creator Himself, entered into time in Bethlehem as a human baby. As a popular Christmas song says, “Veiled in flesh the Godhead see. Hail the incarnate Deity. Pleased as man with man to dwell. Jesus, our Immanuel.” This baby is not only God incarnate, but also the Saviour of the world.

A few years ago, a six-year-old boy named Prince made headlines when he fell into a freshly dug hole in Haldheri, Haryana. The riveting ordeal was telecast live on Zee TV, and as the whole nation was glued to the television, rescuers worked tirelessly for 48 hours to free the boy. The sixty-foot deep shaft was just wide enough to fit the boy and too narrow for an adult. Attempts were made to lower ropes and pull him out, but in vain as the boy was unable to hold on. The army was called in to help after villagers and police failed in their efforts to rescue the boy. Oxygen was pumped into the hole and soldiers spoke encouragingly to keep up his morale while they cleared mud from a nearby abandoned well using their bare hands to create a pipe-reinforced passageway connecting the well to the pit. Finally, one of them was able to reach across and pull Prince through the pipe and up through the well.

If not for the courageous efforts of those brave soldiers, Prince would have been lost. The child could not save himself; someone had to go down to where he was to rescue him.

On Christmas day, God came down as a human baby to rescue us. But from what? Why do we need a Saviour?

Malcolm Muggeridge famously said, “The depravity of man is at once the most empirically verifiable reality but at the same time the most intellectually resisted fact.” Each day as we read the news we are confronted with the reality of the depravity of man. We are often ashamed of the moral depths to which we can plummet. In spite of a myriad of laws passed through the centuries, economic and political reforms, numerous resolutions, and scientific and technological advances we still find ourselves lost, angry, distraught, alienated from each other and ultimately from God. We are so lost that we cannot claw our way back. No amount of motivation or legislation can rescue humanity because our problem lies with the heart. We are in desperate need of help!

Only God is big enough to transform the heart. And so on Christmas day, God stepped into the scene to rescue humanity from the pit of sin and death, offering us forgiveness and reconciling us to Himself. We give gifts because God has given us the most precious gift in Himself. We hang lights because the Light of the world was born. We sing carols because they express the joy offered to us through eternal life found in the baby boy born on Christmas day.

As we give and receive this Christmas, let us remember with gratitude the greatest gift of all, the person of Christ. God so loved that he gave, so let us receive his gift and give from his fullness.